Fresno State has identified fan interaction as an area where improvements could be made.

The Bulldogs won't be the only ones charging onto the turf Saturday night. The "Run to Victory" will send freshmen and transfer students running onto Jim Sweeney Field. The pre-game idea came from the new athletic director.

Senior Associate Athletic Director Paul Ladwig explained, "We want to be able to create new and different things and Terry Tumey has really, he came to us and said can we do this? Of course, we can do this and the students are pumped up about making this happen."

The field was being prepped for the game. Fresh flags have gone up. New ADA seating has been established and a student and band section damaged during a water main break last season has been repaired.

Fans will also be able to meet the team during a pre-game walk-through called the "March to Victory."

Ladwig said, "We've created a new path so that more fans in pre-game could see the team, get their selfies, high five, tweet about it, shake their hand as they walk through."

The new game day shirts have arrived at the Bulldog Shop.

Sharon and Dave Stevens of Madera have been part of the Red Wave for decades. They're season ticket holders for football, basketball, and softball.

Sharon said of the new shirts, "When these first came out and I saw them I said, man, that'd be the perfect one to wear when we go down to UCLA so we're getting new t-shirts."

Finding the right shirt or jersey to wear on game night is part of the fun for the fans who have high hopes for Fresno State.

Fresno State Junior Cade Celentano replied, "Oh 100 percent. I think they can go undefeated honestly. That's some bold words but I think they could, yeah."

Cade was thinking about wearing a Davante Adams jersey on Saturday.

Saturday's pre-game walkthrough will start at 4:20 p.m. Fans tailgating in the Blue and White lots will be able to greet the players. Kickoff will be at 7 p.m.
Report a correction or typo
Related topics:
sportsfresno statesports
Copyright © 2020 KFSN-TV. All Rights Reserved.
FRESNO STATE 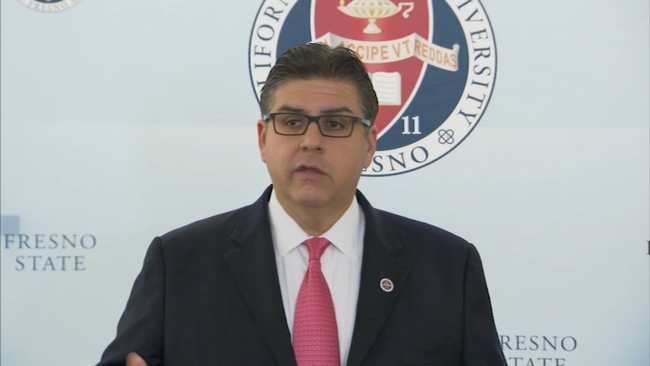