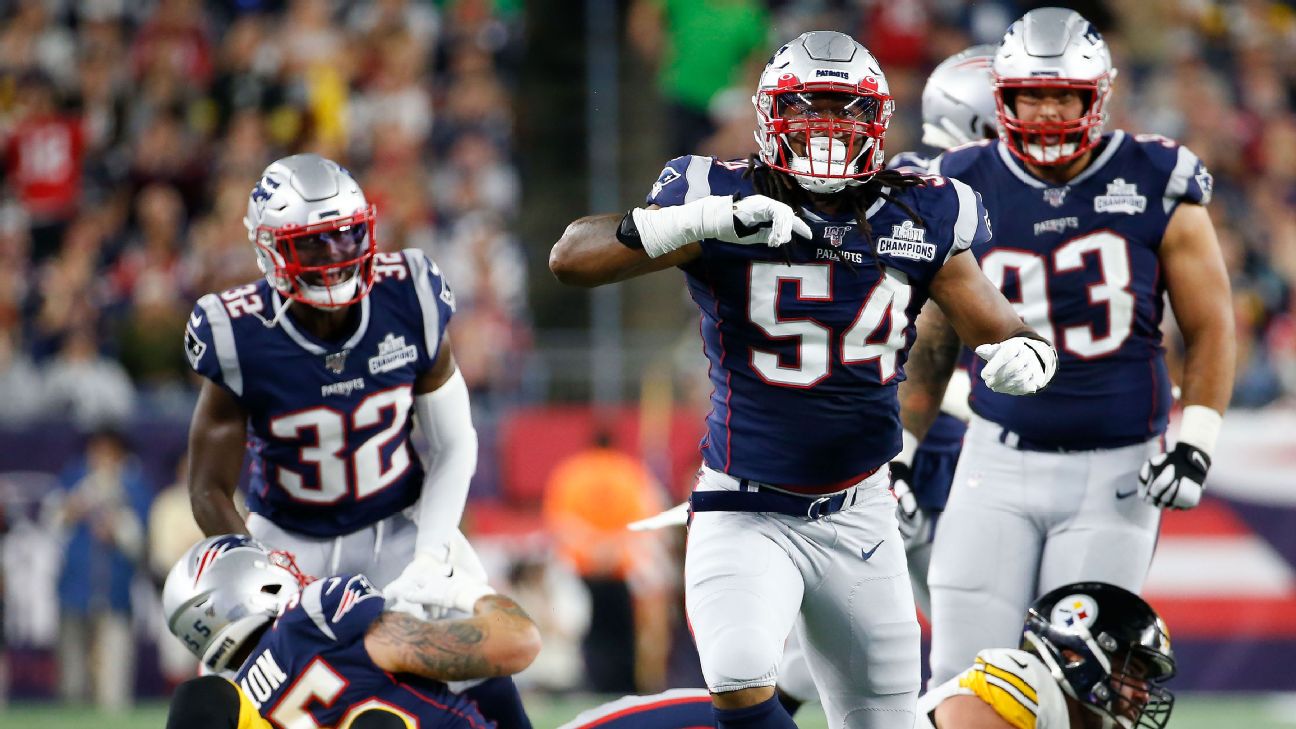 ESPN
By Jeremy Fowler
Playing championship defense is exhausting. Every time a team looks elite on that side of the ball, Lamar Jackson happens. Or pass interference review happens. Or the San Francisco 49ers need 48 points to win in New Orleans. Savvy playcallers run enough shifts and motions to dizzy the best defensive fronts.

But defenses are standing up to the challenge in a serious way. Several of them are saying: Enough. This isn't the Big 12. And they might just be good enough to spark a Super Bowl run.

The numbers help tell the story:


The ghost of the 1985 Bears won't be exorcised any time soon; every team has flaws. But some players around the league wonder whether defenses are starting to figure out things that stumped them a few years ago.

"The jet sweeps and the crossing routes, those were killing us a few years ago," Bills linebacker Lorenzo Alexander said. "But we've adjusted to that, and I think things have settled down for defenses. Now the offenses are making more adjustments."

Added Tennessee Titans corner Logan Ryan: "You have safeties who can cover as nickel corners now, corners who can function as linebackers. And the quarterback doesn't know where the pressure is coming from."

Several teams with a defense-first identity hope to light the playoff path with blitzes and coverages -- while showing there are different ways of getting there.

Buffalo is the ultimate case study for whether a really disciplined defense can win without much star power. Pro Bowl corner Tre'Davious White is turning into a star. But Buffalo's depth chart is an amalgam of overachievers, undervalued free agents and once-underachieving draft picks, such as Shaq Lawson, who was labeled a bust.

No players embody the Sean McDermott-Brandon Beane culture in Buffalo quite like the safeties. Buffalo believes it has one of the league's best tandems in Micah Hyde and Jordan Poyer, which many around the league wouldn't have predicted a few years ago. Poyer was a special-teamer and backup in Cleveland, and Hyde was a productive starter in Green Bay but hardly a marquee name.

Buffalo's approach to personnel is clear: Identify what players do well, then let them do that. In Hyde, Buffalo saw a safety who could cover tight ends in the slot really well. In Poyer, they saw a good tackler and a smart player. Now the duo prevent big plays weekly. Buffalo allows 15.9 points per game (second behind the Patriots) despite ranking 10th in takeaways, with 21.

In Week 14, Jackson averaged 5.8 yards per pass and didn't break a run longer than 16 yards, in part because Buffalo coaches pored over Baltimore formations all week and told players not to "get nosy" against the read-option (as in, don't chase the ball).

What's more, both safeties are on reasonable contracts, with a combined cap hit of less than $11 million this year and $10.7 million next year.

Hyde admits he was spread too thin in Green Bay, which used him as a hybrid. In Buffalo, he has one home at free safety.

"Sean gave us the confidence by saying, 'Don't be anybody you're not,'" Hyde said. "I was thrown into the mix [in Green Bay] that I was doing so much to help the football team but I wasn't able to focus on one position. But when I got here, they said, 'Do what you do best. That's how a lot of guys got here.'"

It also helps that the Bills returned 10 starters from last year.

"We may not be fancy, but we believe in what we do," McDermott said. "The guys, when we do that, we give them great clarity. There's a lot of power in that."

Mike Tomlin can say it proudly.

"I've always felt good about good defenses controlling the outcome of significant games," Tomlin said at his Week 15 news conference. "I believe that is an axiom of football. I think that is never going to change. I think if you have a good defense, you have a chance in any circumstance."

He has spent much of the past decade trying to prove that point. The Steelers have used seven straight first-round draft picks on defensive players -- make that eight with the 2020 pick sent to the Miami Dolphins for safety Minkah Fitzpatrick. Only the Green Bay Packers can match that draft investment, spending their last eight picks on the defensive side. No other team comes close.

The security of having franchise quarterback Ben Roethlisberger and elite weapons once gave Tomlin and general manager Kevin Colbert that luxury. But the transition was ugly at times. Pass defense was erratic for years, the 2017 defense collapsed after the loss of Ryan Shazier, and last year's group couldn't create turnovers against good or bad offenses.

The pieces coalesced in 2019, just in time to offset the loss of Roethlisberger to season-ending elbow surgery and the Antonio Brown trade.

The Steelers could always overwhelm teams with the pass rush, but now the secondary finally caught up.

The Steelers spent all offseason harping on turnovers, with defensive backs putting money in a pot every time they dropped a pass in training camp.

Turns out they needed to adapt to survive.

"Teams are still throwing for yards all over the place. The days of holding teams to single digits are over," linebacker Vince Williams said. "You've got to be able to get the ball back."

And each of their past four wins ended with Pittsburgh forcing a turnover, which Cameron Heyward saw coming.

No defense looks more frightening getting off the bus than the San Francisco 49ers. A recent pregame scene in Arizona prompted a double-take and the urge to buy rib padding. Arik Armstead and DeForest Buckner were giant sequoias. A sleeveless Nick Bosa looked like he just finished his 98th biceps curl. Dee Ford appeared generally unhappy that he wasn't tackling something.

The four walk out together, and they want you to notice. "It's an everyday thing for us -- it's how we practice, how we prepare, how we live," Ford said of the intimidation factor. "I guess witnessing that is the energy we give off. It's not forced. It's who we are."

This is the result of a front office selling out to improve a defensive line. The 49ers used four of their last six first-round picks on the defensive front, and Solomon Thomas is the only player who hasn't fulfilled the hype. They used a second-round pick to acquire Ford from the Chiefs, then used free agency to supplement the back end with linebacker Kwon Alexander, cornerback Richard Sherman and others.

That plan breeds confidence for Ford, who makes a declaration sure to reverberate in New England.

Here's what San Francisco is doing to bridge the gap: speaking dominance into existence and letting a fiery All-Pro corner impose his will.

After that Week 9 win in Arizona, during which San Francisco gave up a then-season-high 25 points, including an 88-yard touchdown late in the fourth quarter to Andy Isabella thanks to bad tackling angles, Sherman proceeded to blast the defense's lackluster effort. He called the performance "not championship football" and said praising a win is "not the accountability we need" from a leader.

His goal was clear: Intensify the preparation for an upcoming five-week stretch that included Seattle, Green Bay, Baltimore and New Orleans.

"It's about doing your job repeatedly, with robotic consistency," Sherman said.

That sounds like something out of New England's playbook, which is exactly what Buckner needed to hear. Told about the comments, he confirmed he has heard the same thing from Sherman. "He's got the championship pedigree," Buckner said. "We need that from him."

The motivation largely worked. The 49ers went 2-2 during that stretch, but the defense shut down Green Bay, held the Ravens to 20 points and fought Seattle into overtime. San Francisco is still angling for a No. 1 seed in a brutally tough NFC despite a curious Week 15 loss to Atlanta.

Each member of the front foursome has at least 6.5 sacks. And the 49ers have enough consistent corner play to increase that total with coverage sacks, though Sherman's hamstring injury looms large.

Patriots players might as well open up the "Patriot Way Manual" when asked how the defense has kept scores so low this season. They have all of the safe, vanilla answers ready: communication, repetition, accountability.

But personnel evaluators leaguewide can describe rather easily why they think New England is the league's most complete defense.

"New England isn't a dominant defense as far as physically beating people, but they are so disruptive and smart and create turnovers, they can dominate games that way," one AFC personnel person said. "San Francisco can generate a pass rush with four people, which makes them special, but they don't have near the secondary New England does."

This is why the Patriots are dangerous in the playoffs despite the offense's recent struggles: The pass defense doesn't give up yards in bulk and is opportunistic with the ball in the air. No opposing quarterback has posted a 300-yard game against the Patriots. The rest of the league had given up at least one by Week 11, with 27 defenses doing so by Week 4.

New England's situational defense is elite. Just consider cornerback Stephon Gilmore's pick-six on Andy Dalton on Sunday: Gilmore knew the Patriots were blitzing, so he anticipated Dalton throwing the quick out route to evade the rush. He snatched the ball before receiver Tyler Boyd knew what happened, then it was wheels up for a 64-yard score.

Couple those instincts with the Patriots' ridiculous depth, and the problems for most offenses will likely continue. Linebacker Jamie Collins has sparked the defense in his second stint with the organization, with the Patriots praising his improved awareness to pair with his high-end athleticism. He does just about everything for New England: It can blitz him or drop him into coverage.

The only quarterback to give the Patriots major problems is Lamar Jackson. Asked if the Patriots want to see the Ravens again in the playoffs, defensive end Deatrich Wise Jr. wouldn't go that far, saying he wants to see "any type of offense" again.

Then he spoke with a confidence of a team destined for a top-two seed thanks to years of well-nurtured chemistry.

"Our goal is not to be the best defense. Our goal is to dominate a single play," Wise said.

Ravens: The key is adaptability

Some of the best defenses thrive off midseason change, and the Ravens are one of the better examples. They might not be in the same class as San Francisco and New England, but the secondary has been impressive since reconfiguring the lineup.

Cornerback Marlon Humphrey credits a locker room that keeps ego in check. Humphrey, with first-round pedigree and plenty of splash plays over three seasons, admits that being asked to play more in the slot after the arrival of Marcus Peters via trade was brutal.

"At first I was like, 'Dude, I'm not trying to play in the slot,'" Humphrey said. "But then looking at it, I recognized that's the best option. I just want to win."

It helped that Peters took the defensive backs out to a chemistry-building dinner in his first days on the job. A three-corner lineup of Humphrey, Peters and Jimmy Smith -- with Brandon Carr playing about half the snaps as the fourth corner -- allows Baltimore to mix-and-match blitzes thanks to tight coverage. The emergence of versatile safety Chuck Clark opposite veteran Earl Thomasmakes the Ravens even more versatile.

"Most people would have a problem with that -- especially someone that talented," defensive tackle Michael Pierce said.

That kind of energy is necessary in the playoffs when Jackson and the Ravens' offense need a boost.

If they even do. 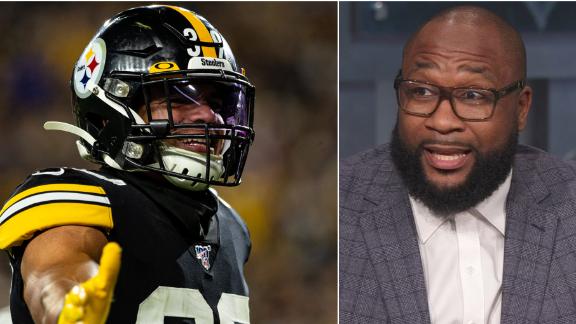 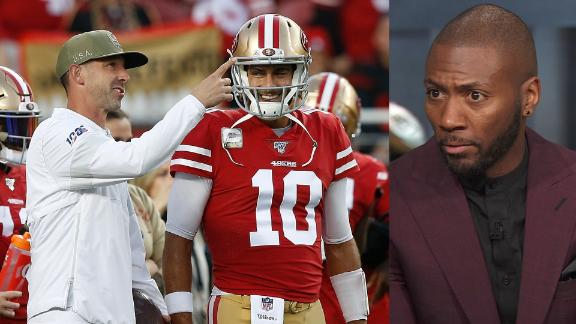