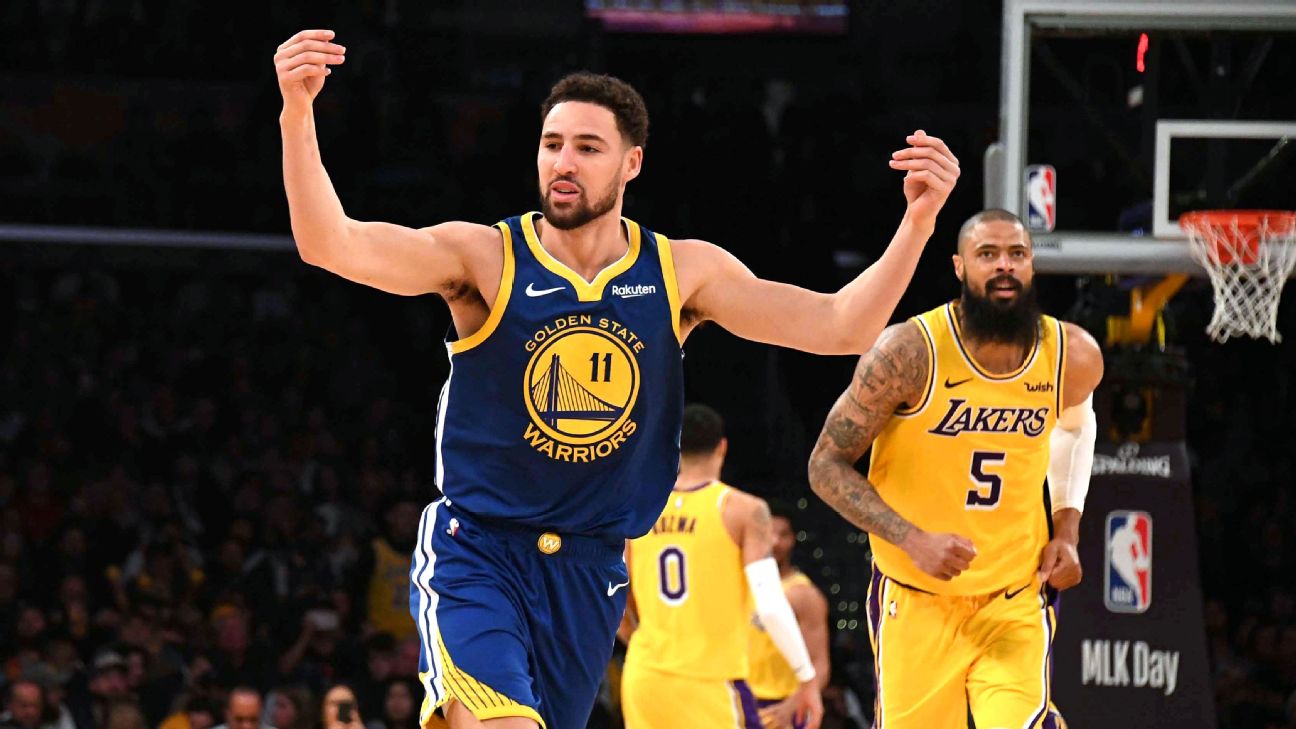 Thompson, who also tied the record for consecutive 3-pointers to start a game, missed his 11th attempted 3-pointer before exiting the game with the Warriors holding a wide lead. His performance left the Staples Center crowd in awe, especially in the third quarter as Thompson hit shots from all over the floor, going 8-for-9 from the field.

"That's Klay," Warriors center DeMarcus Cousins said. "I think we're all used to it now. It was 10 straight? S---. That's impressive. Man, it's like a new record every day, ain't it?"

Thompson, who needed just 27 minutes to do his offensive damage, is playing his best basketball of the season over the past month after struggling to find a rhythm throughout the first half of the season. He came into the game averaging 24.6 points over eight games in January. According to ESPN Stats & Information research, Thompson's effective field goal percentage of 1.100 on Monday night is the best mark in a game in NBA history with a minimum of 15 field goal attempts.

Thompson's 3-point explosion on Monday night looked similar to his record-setting game on Oct. 29 in a 149-124 win over the Chicago Bulls.

In that game, Thompson knocked down an NBA-record 14 3-pointers, scoring 52 points in 27 minutes. He was 18-for-29 from the field and 14-for-24 from beyond the arc, making his numbers against the Lakers on Monday even more impressive.

"Klay does that five or six times a season," Warriors head coach Steve Kerr said. "You guys have seen it. He just got red hot, white hot."

Monday's performance marked the fifth time in Thompson's career that he had 10 or more 3-pointers in a game and the 13th time he has had 40 or more points. Monday's win marked the eighth straight victory for a Warriors group that is also playing its best basketball of the season. The Warriors' next game is Thursday night against the Washington Wizards.

According to Elias Sports Bureau research, Ty Lawson is the most recent player to make his first 10 3-pointers of a game (April 9, 2011), and Chandler Parsons is the most recent player to make 10 3s within a game (Jan. 24, 2014). This is Thompson's third career 40-point game in which he has played 30 or fewer minutes. No other player in the shot-clock era has done that more than once (since 1954-55).

Thompson was in an understandably great mood after the game, noting that he enjoyed having his dog, Rocco, traveling with him for this portion of the road trip. He also acknowledged that the Lakers' blowout of the Warriors on Christmas night factored into the Warriors' wanting to get a little payback at Staples Center against an undermanned Lakers team playing without LeBron James, Rajon Rondo and Lonzo Ball.

"It definitely had an effect," Thompson said. "I will say, one thing about this game is we play these guys four times. You do have to have a short memory because it's such a long season, but when it's a beatdown like that, you're going to remember it."