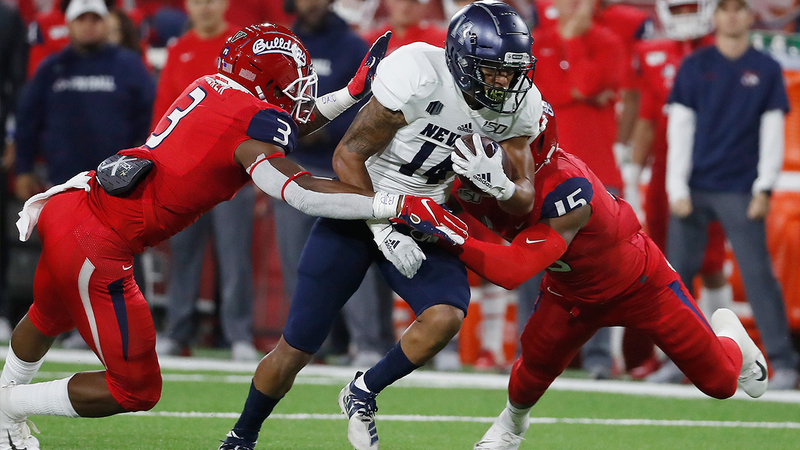 Fresno State welcomed back former Diamond Dog Aaron Judge at Saturday's game against Nevada. The New York Yankee watched the Bulldogs take on the Wolf Pack in a vintage Derek Carr jersey. Judge was an honorary captain for the game and was recognized during the second quarter.

The Class of 2020 features 17 players, and a fourth-year junior, who were all honored before kick-off for Senior Day.

The Dogs were down 14-0 early on, but Jorge Reyna made a 34-yard connection to junior Ronnie Rivers cut the deficit in half.

Later, Nevada came in with a completion, but senior Mykal Walker came in to punch the ball out. Tulare native Romello Harris recovered the fumble. On the ensuing Fresno State drive Jorge Reyna took a tough hit and would leave the game. Backup QB Ben Wooldridge came in, and his first throw was a Touchdown to Keric Wheatfall, knotting the game at 14.

Still in the second quarter, Fresno State forced another Nevada fumble. Jorge Reyna would return to the game and connect with Tulare Union's Emoryiee Edwards for the score. Edward's second touchdown of the season gave the Bulldogs the lead 21-14.

.@FresnoStateFB's Jared Rice is now the school's all time receiving yards leader for a tight end. He surpassed Bear Pascoe and is just four receptions away from owning the career receptions record.

Nevada would answer in the third quarter. The Wolf Pack scored two touchdowns to tie the game at 28.

Nevada would score the game-winning touchdown with just 12 seconds left in the game.