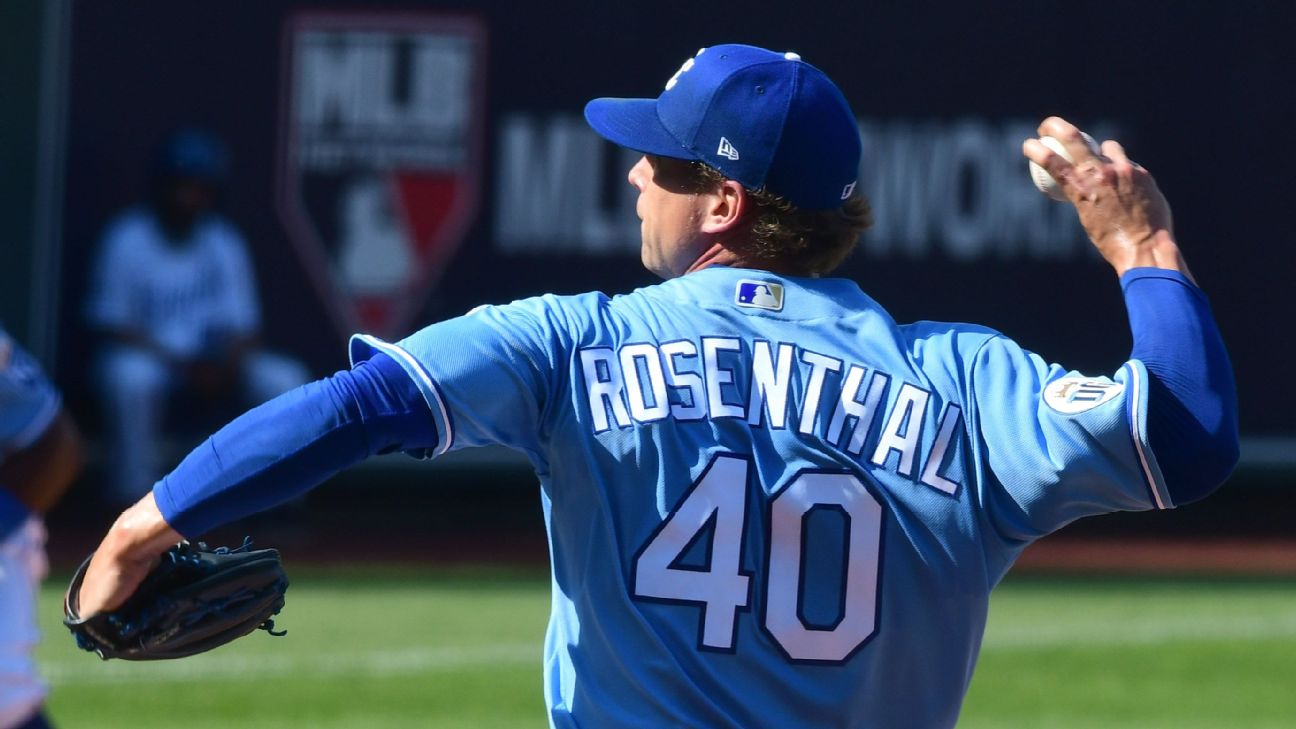 The San Diego Padres have acquired reliever Trevor Rosenthal from the Kansas City Royals, it was announced Saturday.

Arguably the best reliever on the market is headed to the Padres, whose beleaguered bullpen will get a huge boost from a revitalized Rosenthal as the team chases its first playoff appearance in 14 years.


"We're excited to have him in," Padres manager Jayce Tingler said. "Lot of history, of experience at the back end of bullpens and closing games. He's been having a great year in Kansas City. We're excited to get his addition to our group."

The Royals are getting outfield prospect Edward Olivares and a player to be named if the deal.

"By no means are we giving up hope," Royals general manager Dayton Moore said. "I believe and everyone believes we have enough talent to make things interesting in the last month.''

Rosenthal, 30, has a 3.29 ERA with 7 saves and 21 strikeouts in 13 innings over 14 appearances this season. He has fared especially well against left-handed batters, striking out 16 of the 32 hitters he has faced and allowing just three hits and a .148 slugging percentage.

San Diego thought its bullpen would be one of its biggest strengths this year after it traded for Emilio Pagan and signed Drew Pomeranz in free agency. But it has been hit hard by injuries, losing closer Kirby Yates for the rest of the season because of an inflamed right elbow. Pomeranz was on the IL with a strained left shoulder before he was activated on Saturday.


Through Saturday, the Padres are second in the NL West with a 20-15 record. Tingler said the team hopes Rosenthal can join the club in time for Sunday's game at Colorado.

The Royals signed the former All-Star reliever to a $2.25 million deal after last season.

He was dismal with the Detroit Tigers and Washington Nationals in 2019, going 0-1 with a 13.50 ERA in 22 appearances with severe bouts of wildness. It was a far cry from his 2015 form, when Rosenthal had a 2.10 ERA and 48 saves while helping the St. Louis Cardinals to a 100-win season and the NL Central title.

Rosenthal has 128 saves and a 3.46 ERA over eight big league seasons. He also was part of the 2013 Cardinals team that lost to the Boston Red Sox in the World Series.

Olivares, 24, is a rookie who can play all three outfield positions and is the second talented-but-risky Padres outfielder whom the Royals have acquired this year after they traded for Franchy Cordero.

"This made a lot of sense for us at this time," Moore said. "I wish we'd be adding at this time, but it was nice to get a player back that's a good fit and will improve our team for the future."

The trade deadline for the pandemic-delayed season is on Monday.