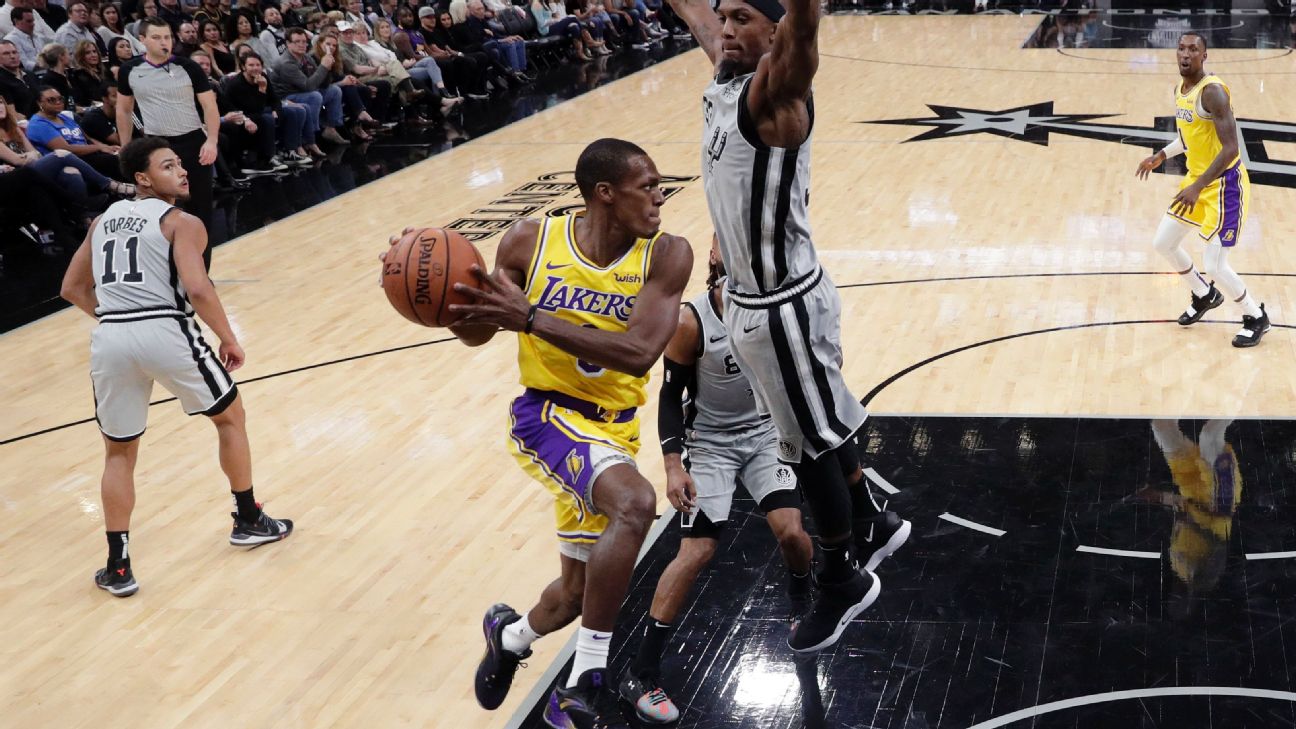 SAN ANTONIO -- With the Los Angeles Lakers trailing the San Antonio Spurs by three with 15.9 seconds remaining, Rajon Rondo had a clear path to the basket but opted to pass up an open layup in hopes of finding a 3-point shooter for the tie.

However, San Antonio's defense didn't bite, and LeBron James was unable to knock down a contested, overtime-forcing 3-pointer for the second time in a week against the Spurs. San Antonio won another nail-biter over the Lakers 110-106 on Saturday at AT&T Center.

After the Lakers (2-4) had their two-game win streak snapped, Rondo and the Lakers explained what happened when they were down three with a chance to cut the lead to one and foul or tie the game.

"We didn't have any more timeouts," Rondo said. "You know, I thought I could probably suck somebody in [on the Spurs' defense off the Lakers' 3-point shooters], but they did a great job of staying home. The layup would have gotten us one point closer. We'd still have to foul, but we didn't have any timeouts, so maybe ... I just made a split decision, and we didn't get what we wanted."

The Lakers thought they let one get away in San Antonio after leading by 11 with 2:32 remaining in the third quarter. They fell behind by eight with 1:34 left in the fourth but scored seven straight points.

After DeMar DeRozan (30 points) scored to push the San Antonio lead to 108-105, James hit a wide-open cutting Rondo. Rondo, who had just returned from a three-game suspension for his role in a fight with Chris Paul and the Houston Rockets a week ago Saturday, then opted to turn down a layup. As he went to pull the basketball out of the paint, he nearly lost the ball before passing it to Josh Hart. Hart, covered by DeRozan, immediately fed James, who missed a contested 3.

Hart was able to draw a foul while crashing the glass, and he made the first free throw before saying he intentionally missed the second.

James took an inadvertent elbow from Pau Gasol to the neck as they went for the rebound. Gasol got the rebound and was fouled before making both free throws to seal the game.

James, who poured in 35 points and 11 rebounds, saw what Rondo was trying to do.

"I was looking for a 3 and then 'Do opened up wide-open, and I put the ball in his hands to make a play," James said. "And sometimes when you drive it, you kind of mess with the defense, and they start to shrink in, and you're able to get a 3, and that's what 'Do was thinking, trying to get Josh Hart one. But they stayed home and got it back to me, and I took one that missed."

Lakers coach Luke Walton said the plan was to get James switched onto a smaller defender for a potential 3-point shot. If that wasn't there, the Lakers would go for a "quick two and play the foul game." But the head coach made it clear that he trusts Rondo's judgment.

"We were down three," Walton said. "I think he was figuring, let's try to tie this thing up. So obviously, he knows what he's doing out there, but that was his call."