Rim protection from Anthony Davis won a game for the Lakers 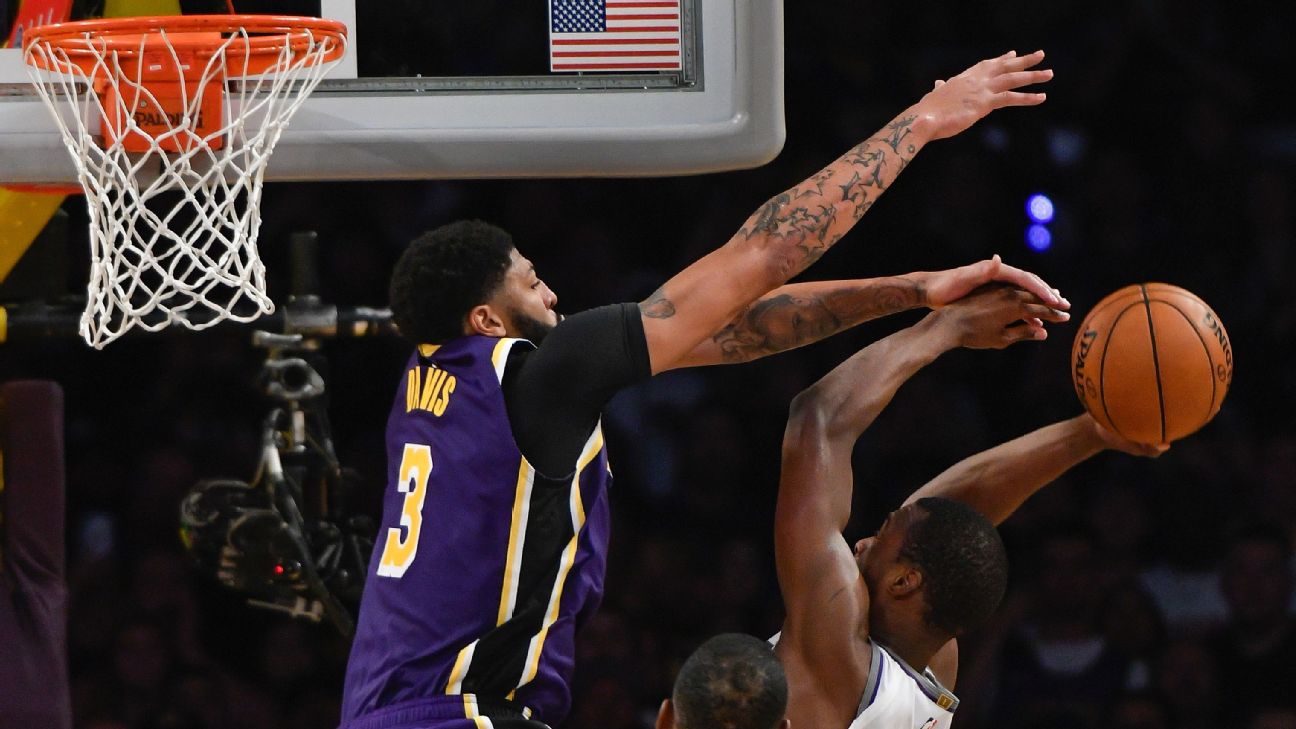 LOS ANGELES -- LeBron James destroyed Nemanja Bjelica with a dunk in the first half on Friday. Obliterated him. Might as well have turned Bjelica's No. 88 uniform on its side and sent him off to infinity, and beyond.

It was a career highlight reel-worthy throwdown for James on the same day he declared at shootaround that he, at 34, is like New England Patriots quarterback Tom Brady, at 42: timeless.

"Me and Tom Brady are one in the same," he said. "We're going to play until we can't walk no more."

But after theLos Angeles Lakers' 99-97 win over the Sacramento Kings, to bring Los Angeles' record to 10-2, there were no questions posed to James about the jam.

You see, Anthony Davis, whose first-half line of three shots and two rebounds was, well, even less productive than Bjelica's, kind of made everything else that happened in the first 47 minutes and 57.7 seconds of game action somewhat irrelevant when he swatted awayHarrison Barnes' potential game-tying shot just before the final buzzer.

"Barnes came to the basket and AD's as good as anybody in the world at making that play," Lakers coach Frank Vogel said. "Made a terrific play to save the game."

Vogel wasn't being hyperbolic. It was Davis' fourth blocked shot of the game, a tick above his average of 3.0 blocks, which is both a career best and also the best average in the NBA, which happens to be the best basketball league in the world.

"Just try to go straight up, go vertical," Davis said when asked what it's like to be the only guy between the ball and the basket with the game on the line. "Try to make them finish through contact. And once I saw that the ball was low, I had a pretty good instinct of blocking the shot. So I just wanted to make sure I went vertical first and made it tough on him, and if he made the shot, he made it. But the most important thing I wasn't trying to do was foul."

No whistle was blown, even though Barnes appeared to be tripped by James when he made his move on the perimeter and Davis' body looked to come in contact with Barnes before he swatted the shot away.

The NBA's last-two-minute report could back up several Kings players' claim that the referees got some stuff wrong down the stretch. GuardBuddy Hield went as far to say, "I think it got stolen away from us."

But as it stands, it was the latest in a game in Davis' eight-year career that he blocked a shot that could have either tied the game or taken the lead for the opponent, according to ESPN Stats & Information research. It completed a dominant night for Davis on defense. The Kings shot just 2 for 11 from the field on shots that he contested.

"That's what's special about him," Vogel said. "He can just impact that game, even if he's not going offensively or they're double-teaming him. It wasn't really that he was having an off night, but they were double-teaming him every time he touched it. For him to impact the game the way he did on the other end of the floor, it just shows what kind of special player he is."

On a night when he finished with a season-low five rebounds and scored fewer than 20 points for just the second time since joining the Lakers (he finished with 17 points on 5-for-12 shooting), Davis was still as impactful as anyone on the floor not named LeBron.

"When the shot's not falling, I try to do the other things to help the team win," Davis said. "And the team was trying to get me going, just missed some shots. And tried to take it out on the defensive end, making plays for my team and making sure the other team didn't score. Kind of just make up for it."

James finished with 29 points and 11 assists and went 7 for 7 from the free throw line, including two in a row with 5.5 seconds remaining to give Los Angeles the final lead of the contest.

Of course, James got some love for the first-half dunk from his teammates:

"I was waiting for one of those ... Eventually it was going to happen," guard Alex Carusosaid.

But James passed on his love for Davis, like Brady finding an open receiver.

"AD can guard the perimeter and in the paint," James said. "He's a hybrid, has the athletic ability to stay in front of guards on the perimeter. His ability to guard bigs in the post, so if they're posting, he can do it all. I believe I take that challenge, as well, being able to guard quicker guards on the perimeter and bigger guys when we get into the post -- being able to just hold my ground and be able to make them take tough shots. Having that luxury is key for our team." 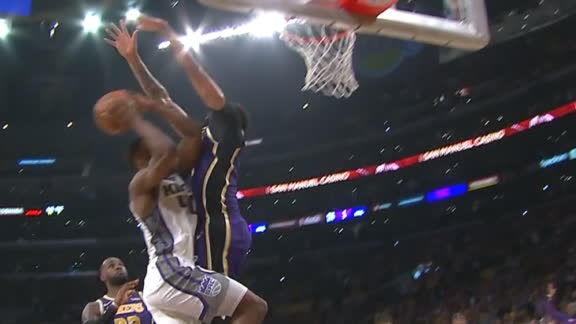 Davis seals Lakers win with a block at the buzzer
Harrison Barnes tries to get to the basket for a game-tying layup, but Anthony Davis rises up to stuff the attempt as the game ends. 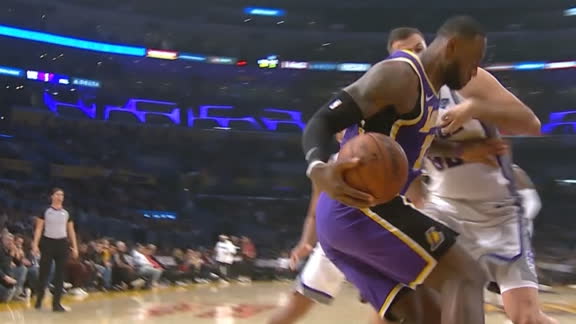