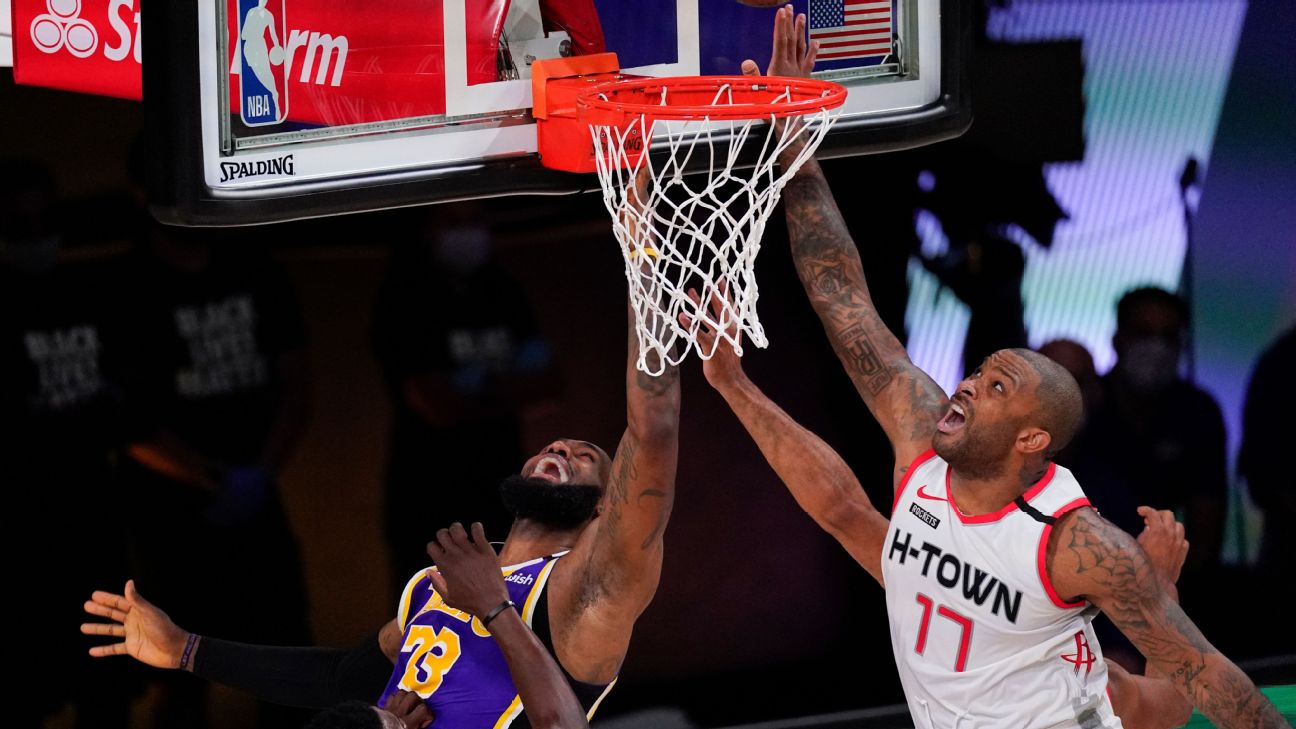 Houston Rockets guard Russell Westbrook instinctively closed out on Danny Green as the Los Angeles Lakers' shooting guard began to line up a corner 3-pointer. It didn't matter that it was during a break in play early in the fourth quarter of Friday's Game 1.

Green, as players often do, wanted to take a practice jumper during the dead ball in hopes of finding a little rhythm. Westbrook refused to allow it, getting in Green's face and poking at the ball after Green turned his back to Westbrook.


The Rockets take defense seriously at all times during these bubble playoffs, even when the shots don't count. That relentless focus and feisty attitude played a major role in the Rockets' 112-97 win over the top-seeded Lakers to take the early lead in the Western Conference semifinals series in Lake Buena Vista, Florida.

"We're here. We're not going [anywhere]," Westbrook said. "No extra shots. He can shoot those shots tomorrow or before the game. At least me personally, my guys know that I don't want to give no advantage, no nothing. Let them know that we're here. Every time they shoot the ball, we're going to be right there."

Houston has earned its identity as an elite offensive team, and the Rockets had plenty of scoring firepower in the series opener. James Harden scored 36 points, Westbrook contributed 24 points and Eric Gordonhad 23 points.

But the Rockets consistently emphasize that their defense will determine whether they're able to make a championship run, and they've backed up those words during the postseason.


"Obviously if shots aren't falling for us, we have something to fall back on, and that's our defense," said Harden, who held the Lakers to 4-of-16 shooting as the primary defender, according to ESPN Stats & Information research. "We've been showing that. Even in that last series against OKC, there were a few games that we didn't shoot the ball well, but our defense won us basketball games. That's a great sign for our team.

"Offensively, we can score with the best of them, but defensively, I think we've found it."

The Rockets' defensive game plan against the Lakers relies heavily on Gordon and 6-foot-5 center P.J. Tucker rising to a couple of the NBA's most daunting challenges: serving as the primary defenders against Lakers superstars LeBron James and Anthony Davis.

"They do a great job of responding, taking the challenge," Rockets coach Mike D'Antoni said. "It is a challenge when you talk about LeBron or Anthony Davis, two of the best players in the league. They take that challenge. P.J.'s taken the challenge all his life; that's why he's in the NBA. Eric Gordon is just a super defender, big or little."

James finished with 20 points on 7-of-15 shooting with seven assists and four turnovers, statistics that the Rockets would love to hold him to on a regular basis. The 6-foot-3 Gordon, whose crunch-time defense on Thunder point guard Chris Paul was an underrated key in the Rockets' Game 7 victory, often fought through screens to stay on James, an exception in Houston's switch-heavy scheme.


Davis finished with 25 points on 10-of-16 shooting, but none of his buckets came against Tucker. According to ESPN Stats & Information data, Davis was 0-of-1 from the field and committed two turnovers in 26 possessions in which Tucker was the primary defender on him.

For all the jokes on social media about the perceived mismatch, Tucker has had success defending the 6-foot-10 Davis all season. According to Second Spectrum data, Davis has averaged only 10.2 shot attempts and commits 9.1 turnovers per 100 possessions when being defended by Tucker in the half court. Nobody who has defended Davis for more than 30 possessions had forced a higher turnover rate or held him to fewer shot attempts per possession.

"I laugh at all the memes and the stuff everybody comes up with," said Tucker, who was a game-best plus-19 in 36 minutes despite scoring only six points. "But you've got to play, man. It's basketball, you've got to play. Yeah, I'm short, but I'm strong and I can move my feet and stay in front of anybody. I'm not going to quit. I'm going to fight every play.