These are the Golden State Warriors' unknowns getting big minutes 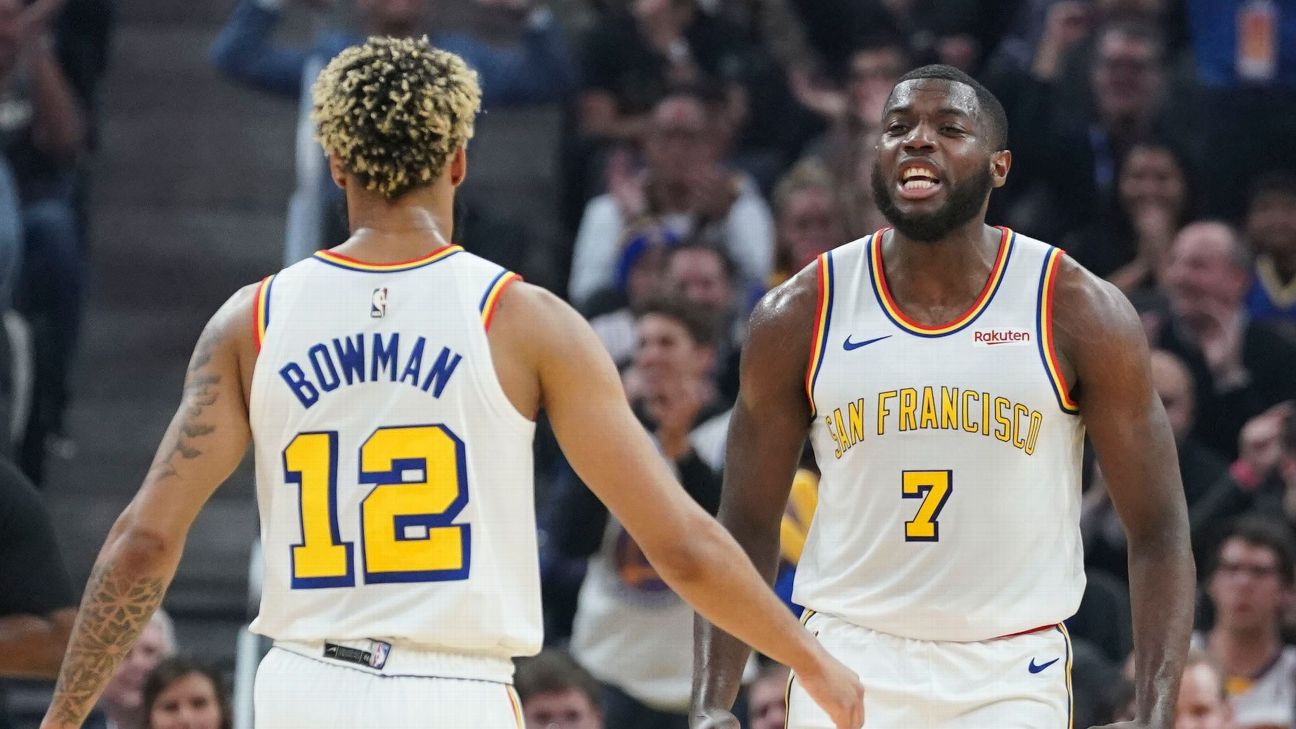 In 2014, the forward was wrapping up his season at prep powerhouse St. Thomas More in Oakdale, Connecticut. In 2018, he was helping Villanova win the NCAA championship alongside fellow St. Thomas More alum -- and current Golden State Warriors teammate -- Omari Spellman.

Now, Paschall, the Warriors' second-round pick in June, finds himself inside Chase Center playing alongside Spellman and yet another St. Thomas More alum: Damion Lee.

"It's so funny how we all ended up here."

Paschall, Spellman and Lee, along with 2019 first-round pickJordan Poole and undrafted rookie Ky Bowman, make up the group of relative unknowns getting big minutes for a beleaguered Warriors team that not only lost Kevin Durant, Andre Iguodala and Shaun Livingston during the offseason but also has been decimated by injuries to stars Stephen Curry (broken hand) and Klay Thompson (ACL rehab).

"Last year it was night and day," Lee said. "Even guys that were on the bench were guys that [have played] seven, eight, nine, 10-plus years. Now, it's different."

The Warriors still have All-Stars Draymond Green and D'Angelo Russell on the active roster. They added a handful of veterans such asWillie Cauley-Stein, Alec Burks, Glenn Robinson III and Marquese Chriss over the summer. But injuries across the board have forced Golden State to dive even deeper into its bench to find reinforcements.

Utah Jazz star Donovan Mitchell first met Paschall at church in Westchester, New York, when they were both 6 years old, and the two started playing AAU basketball in Manhattan together when they were 8.

Fast-forward 15 years, and their paths would cross once again in the NBA, where Paschall's Warriors hosted Mitchell's Jazz onMonday night at Chase Center.

"I only have a sister and he only has sisters, but I consider [him] my brother," Mitchell said. "I can talk to him about anything. He's been there for me in every kind of way, and I think that's what the easiest way to describe us is.

Mitchell knew Paschall would eventually find his way to the league. "Because of just the work," Mitchell said.

After starting his college career at Fordham, Paschall transferred to Villanova following the 2014-15 season, helped the Wildcats win the national title in 2018 and was selected with the 41st pick in the 2019 draft.

Paschall caught the league's attention with 34 points and 13 rebounds in a win over the Portland Trail Blazers on Nov. 4. He admits the past few weeks have been "wild," but he's trying to keep his successes in focus, crediting college coach Jay Wright with instilling the right beliefs.

"We have a triangle [of principles], and that's the bottom of our triangle," Paschall said of Villanova's belief system. "Our most important thing is playing hard. So with that mindset you just come into pre-draft, summer league, all that, just trying to play hard, play harder than the other team.

"So that's one thing that I feel like sticks out for all the Nova guys because I feel like we're all sticking pretty well in the NBA."

Paschall is a rare NBA commodity: a four-year college player, or in his case five years, after sitting out one season following his transfer from Fordham.

"He's really, really smart on the defensive side of the ball," Green said of Paschall. "And then on the offensive end, he don't really get sped up. He takes his time and he can draw fouls, which isn't always something that you see out of a rookie, but he's great at using his body and understanding angles. So it's been really, really fun to watch."

Green stopped and smiled as he talked about the player who is turning into one of the early steals of the draft.

"But that's what us four-years guys got to offer," Green said.

"Growing up, we were always gone," Poole said. "You play AAU, you're on the road all the time -- tournaments left and right. We always wanted a dog at home, but we were gone too much, so cats are pretty low maintenance.

"Basketball is too much, it takes up too much of your time to take care of a dog. ... I just happen to have two cats. They keep me company."

After a strong preseason in which he hit shots from all over the floor, the 20-year-old rookie taken 28th overall in June was expected to see his fan base grow well beyond his pets, but he has struggled to find a rhythm early in the regular season.

The Michigan product comes into Wednesday's game shooting just 28.4% from the field. "It's just a completely different ballgame," Poole said of the transition to the NBA.

The individualism that the Warriors' locker room embraces is something the soft-spoken Poole is enjoying in his first professional season. Even if Green loves to give him a hard time about being a cat person.

As Green overheard the rookie's conversation late Monday night, a smile came across his face as he ribbed the young player about his love for felines. "Cat man," Green said, as Poole tried to defend himself.

Poole started to chuckle, having lived through all the jokes before; it's the kind of banter he appreciates during his first season in the league.

"One thing about this locker room is everyone has their own individual personality," Poole said. "Everybody has a connection, everybody vibes, but it's people in here with kids. I'm supposed to be a junior in college.

"In this organization, they allow you to be yourself, which is amazing. It's something that I've never really experienced on a team before."

Lee has earned the respect of teammates and coaches because of his play and his desire, but he is still trying to shed the label that he is most known for outside the Warriors bubble: Curry's brother-in-law.

Lee, who is married to Curry's sister, Sydel, told reporters in the preseason that he wanted to be known for his play, not because of his connection to the Curry family.

To that point, prior to fracturing his hand in Monday's loss to the Jazz, Lee was making the most of an increased opportunity this season, averaging 10.0 points and 3.9 rebounds in 21.9 minutes. "I pride myself on IQ: knowing the game, knowing spots, picking spots," Lee said.

Lee is in the middle of his second two-way contract with the Warriors after a busy basketball roadmap that included going undrafted following college stops at Drexel and Louisville, a training-camp run with the Boston Celtics in 2016, multiple stints in the G League and a month with the Atlanta Hawks in 2018.

Lee points to former New York Knicks sharpshooter Allan Houston as his basketball role model. He's hoping to become a similar type of player who grinds out a career.

"The way to stay in it is doing what got you here," Lee said. "So whether that's if someone's a defensive specialist, play defense. If you can shoot, shoot. If you're an athlete, be an athlete. Whatever your specialty is, or your best attribute, sticking with that first. And then once you're solidified, you can grow and expand your game from there."

Even a call from legendary college football coach Nick Saban couldn't pull Bowman away from the basketball court. But don't get it twisted: The 22-year-old guard still believes in his skills on the gridiron.

Bowman, who is from Havelock, North Carolina, originally committed to play wide receiver at UNC, and he even got scholarship offers from Alabama and Auburn before finally committing to basketball at Boston College.

"Shoot, I think I could make it in the NFL," Bowman said. "Yeah, I still got pride in myself to be able to do that, but, I mean, [basketball] is my love."

He says Auburn and North Carolina offered him the chance to play both sports, but after his freshman year at Boston College he knew he wanted to focus all his energy on the hardwood.

Now that he has received his chance, he's trying to make the most of it. Like Lee, the undrafted Bowman is also on a two-way contract this season.

"Just the opportunity is big," he said. "Just being able to come out here and play how I do and do the things the team needs from me from the defensive end to offensive end. Just trying to stay within myself but also knowing that this is an opportunity not to just showcase my talents in front of this team but also the other teams around the league."

Bowman scored 19 points in that surprising win over the Blazers.

"Ky doesn't look like a rookie out there," Curry said Monday night, giving Bowman his most impactful praise to date.

Warriors coach Steve Kerr seems pleased with the way Bowman has embraced his opportunity in the face of difficult circumstances for any player, especially a rookie in the middle of a two-way deal.

"He's handled it beautifully," Kerr said. "He's a very confident young player and he's handled his minutes really well. He's had some good games for us, he's seeing the mistakes that he's making and responding positively."

Spellman, who said during the preseason that hechecked in at 315 pounds during summer league, has lost over 50 pounds in the past year after cutting out candy and soft drinks from his daily routine.

"Taking certain foods out, not being a zombie [and eating junk food]," Spellman said. "I still have days where I might eat something that I'm maybe not supposed to, but for the most part staying locked in and dedicated to my diet."

The 22-year-old Spellman,who was the 30th pick in the 2018 draft, has also stayed locked into his role this season after being acquired from the Hawks over the summer for Damian Jones and a future second-round pick.

And he has caught the eye of teammates and coaches by being active on both ends and leaving it all out on the floor.

"He's a sweater," Kerr said with a smile.

Spellman's work ethic is a solid attribute for a young player trying to make it in the league.

Spellman also knows what it's like when people count you out -- potentially a new reality for the last-place Warriors (2-9). The proud Cleveland native grew up cheering for the Browns, one of the most dysfunctional franchises of the past two decades.

His advice? "Just stick with it." 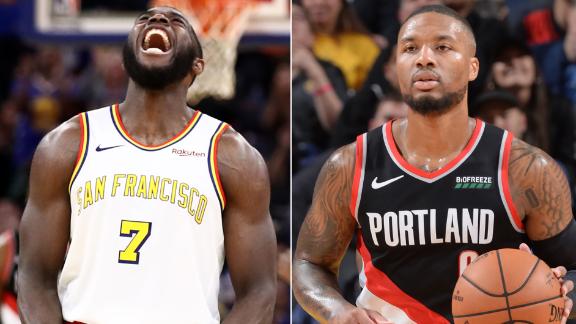