Warriors' Draymond Green out vs. Bucks with sprained toe 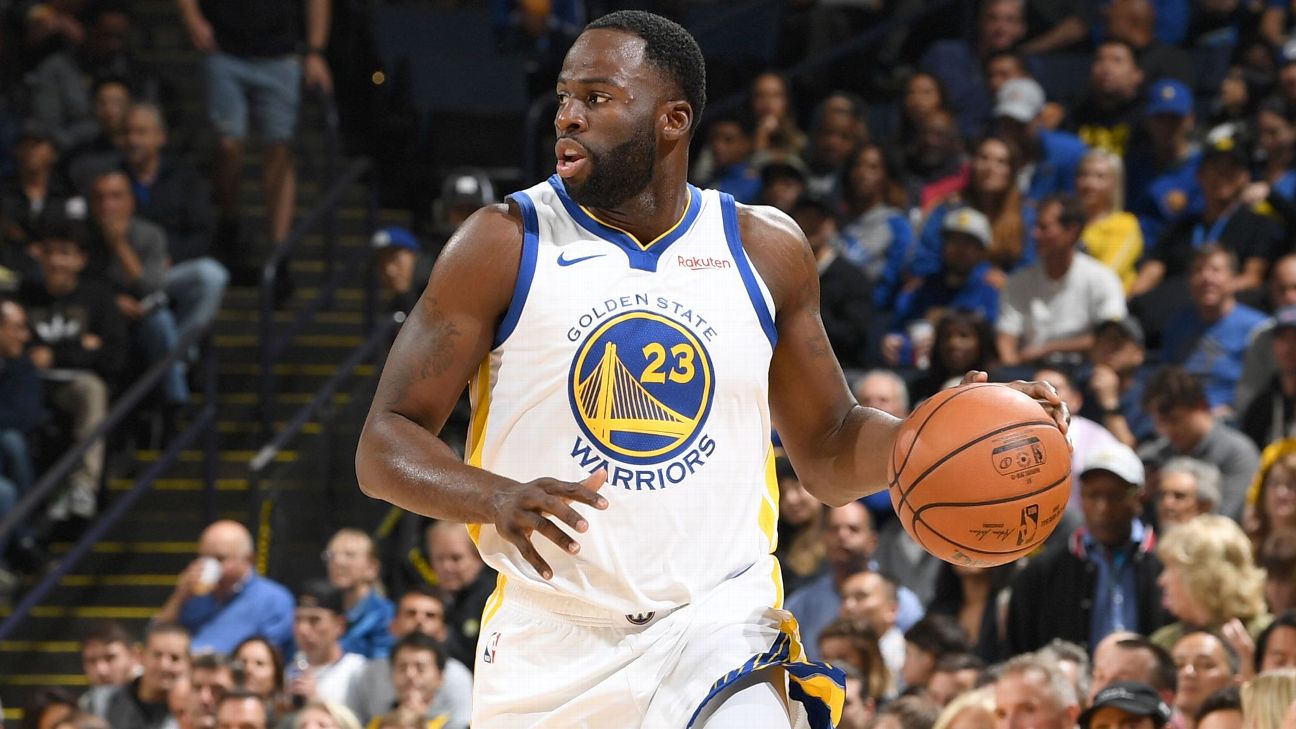 OAKLAND, Calif. -- Golden State Warriors forward Draymond Green will not play Thursday night against the Milwaukee Bucks because of a right toe sprain.

Green initially injured the toe in the first half of Monday's win over the Memphis Grizzlies and did not return in the second half. Warriors coach Steve Kerr does not think the injury will keep Green out long, but the team wants to be cautious given that it's so early in the season.

"It's just day to day," Kerr said after Wednesday's practice. "No concern long term. So we'll just monitor it each day, and we're so early in the season, obviously we'll be cautious. We'll see how it plays out."

Kerr did not want to reveal who would take Green's place in the starting lineup, noting that he had several solid options to choose from.

"Jordan Bell will play more," Kerr said. "We can play Alfonzo [McKinnie] at the 4, play Andre [Iguodala] at the 4, Jonas [Jerebko] has already given us good minutes at the 4. We've got options so we'll be fine."

The Warriors will also be without veteran guard Shaun Livingston, who will miss his sixth straight game because of foot soreness. Iguodala will play after sitting out Monday for rest.

"We're never as good without Draymond," Kerr said. "He's a phenomenal defensive player, the best one in the league in my [opinion]. One of the best I've ever seen and the guy who has to do what modern-day power forwards do, which is cover the entire floor and rebound and stay in front of guards. Nobody's better than Draymond at that. So then it comes down to 'All right, how do we fill that void?' [Bell] does a good job with those things, [Kevon Looney] does a good job, and we could play smaller."

Kerr knows it will be tough for Green to watch from the bench when the Warriors (10-1) host the Bucks (8-2).

"I'm sure he's disappointed about missing this one," Kerr said. "But again, we've got bigger goals ahead. It's a big game for us, it will be an exciting game, but the main thing is to be healthy over the course of the year. We have to be smart. Draymond will be, I'm sure, helping all the young guys out tomorrow. He'll be in JB's ear, and [Damian Jones], he'll be very helpful, and hopefully this injury won't last too long and he'll be back soon."
Report a correction or typo
Related topics:
sportsespngolden state warriorsdraymond greenmilwaukee bucksgswsprained toenbasteve kerr
Copyright © 2022 ESPN Internet Ventures. All rights reserved.
TOP STORIES
Multiple displaced after apartment fire in central Fresno
Local pastor heading to Ukraine to help with humanitarian relief
Fresno city council president sues councilmember for defamation
Shooting victim dropped off at Atwater Police Department
Madera police announce arrest in fatal stabbing of 38-year-old father
Central Valley veterans leave on 21st Honor Flight
Crews battle flames near Tulare County RV resort
Show More
Thousands of dollars worth of lumber stolen from Fresno business
VCH doctor urging parents to not make their own baby formula
Baby formula maker Abbott says agreement reached to reopen plant
Watering now only allowed once a week for Lindsay residents
Organization pushing for Diwali to be observed in Fresno schools
More TOP STORIES News