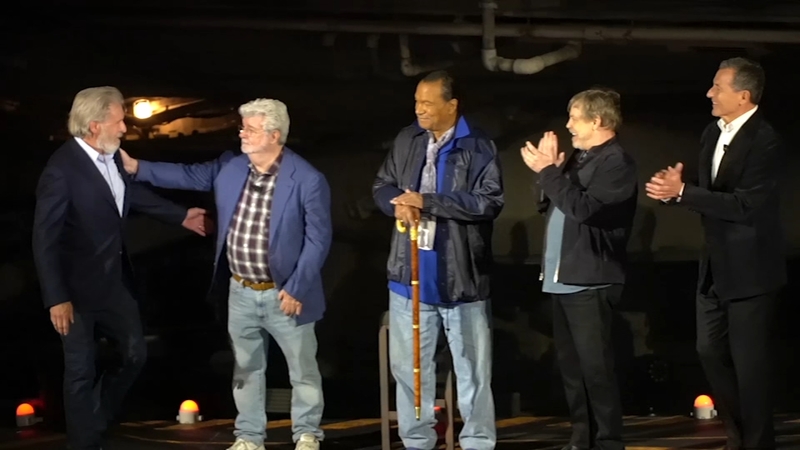 Stars are out to dedicate Star Wars: Galaxy Edge at Disneyland

Star Wars: Galaxy's Edge, was officially dedicated ahead of it's Friday opening to the public --- and for Star Wars fans, the stars were out.

"I'd like to take this opportunity to thank Walt Disney and George Lucas for teaching the world a new way to dream," Hamill said.

Franchise royalty stood on stage to signal the opening of what promises to be Disney's most immersive land, transporting fans of the saga, and newcomers alike, to a new world where your actions will impact your experience.

"Based on the things you choose to do in the land," said creative producer Anisha Deshmane. "People might respond to you, plus these guys behind me might have some reactions as well."

Every single detail is made to look authentic to the Star Wars universe, from the food to the merchandise, and of course to the prize jewel of the land, the Millennium Falcon.

"It's really fulfilling that fantasy that people have had for 40 years of flying the Millennium Falcon," said Walt Disney Imagineer Casey Ging.

The main attraction is Smugglers Run, an interactive ride which puts you in the cockpit of the famed ship.

All that is just phase one, phase two will come later this year, and it will include a new attraction, Rise of the Resistance.