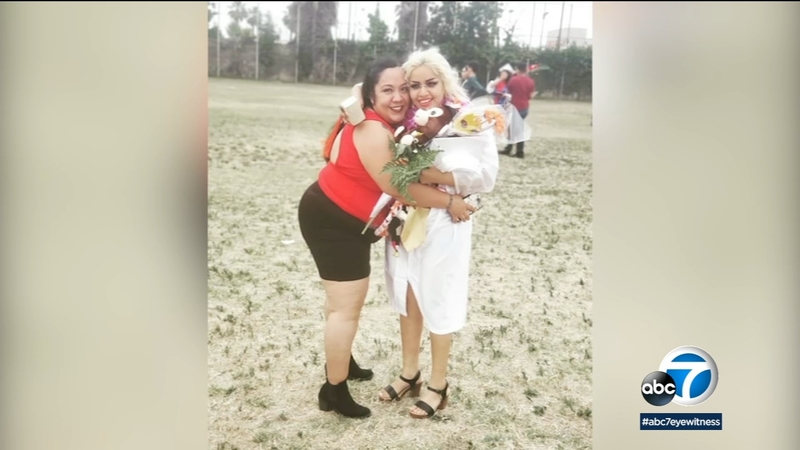 Salas tells ABC7 that Daisy was in her second year at East Los Angeles College and dreamed of owning her own business one day. She was creative, loved camping and cooking with her mom.

Salas says Daisy had broken up with her ex-boyfriend, 25-year old Victor Sosa, about a month before her murder, at least in part due to some alleged physical abuse. Salas says Sosa texted Daisy that February night and convinced her to come outside.

"I'll be back, OK, I won't take long, I promise," Salas remembers Daisy saying. "Those were her last words my baby girl told me. She left, she never came back."

Daisy's grandfather tells Eyewitness News he saw Victor Sosa peeking in through their apartment window that night before Daisy left.

The next day Salas got a call from homicide detectives with the Los Angeles County Sheriff's Department. She rushed home. Daisy's body was still at the scene.

"I found the body right there," Tellez said as he pointed to an alley-like area between two apartment buildings. "I got scared when I saw the body because it surprised me. I never found a body right there, so I picked up the carpet, oh my God!"

Victor Sosa was the immediate suspect, but he was in the wind. LASD detectives tracked every lead. Meanwhile, friends of Daisy launched their own campaign to find Sosa on TikTok and Instagram.

Using the hashtag "Justice for Daisy" - her friends put photos of suspect Victor Sosa on blast.

"Victor Sosa was on the run and detectives worked with several agencies to locate him," says Lt. Charles Calderaro.

The tip that cracked the case? Someone recognized Sosa from the friends' social media campaign and spotted him working at the Rosarito bar and nightclub Papas & Beer.

"Papas & Beer is like a tourist-type restaurant, bar," says Lt. Calderaro. "And based on the information we gathered he had been working there for several weeks."

"This guy was just living his best life in Rosarito, like he had done nothing," says Salas of the photo a tipster sent Daisy's friends of Sosa at the bar. "It's very clear when he's drinking, smoking... this is a person with no conscience, no conscience, for you to murder someone the way he murdered my kid."

Sosa was arrested on July 2 and was returned to Los Angeles to face charges. He has pleaded not guilty to first-degree murder.

Security footage from the apartment building that night may play a role at trial. Detectives believe it shows Sosa dragging Daisy into the alley.

Salas is grateful to the Los Angeles Sheriff's Department Homicide detectives who vowed to hunt down Daisy's killer.

"I was so afraid that my daughter was going to be another statistic," Salas tells Eyewitness News. "Oh, Hispanic girl, Mexican American girl killed by her boyfriend. No, it wasn't that way. My daughter's voice counted. My daughter mattered to people. So, you know that meant the world to me."

Salas wants justice for Daisy and hopes that by telling her story other women will find the strength to leave abusive relationships.

"They think having a toxic boyfriend, a possessive boyfriend - it's not OK," says Salas. "He didn't change. My daughter believed he would change. He never changed, to the point that he killed her."

Daisy's spirit will live on through her mother and two brothers, never forgotten by her family.