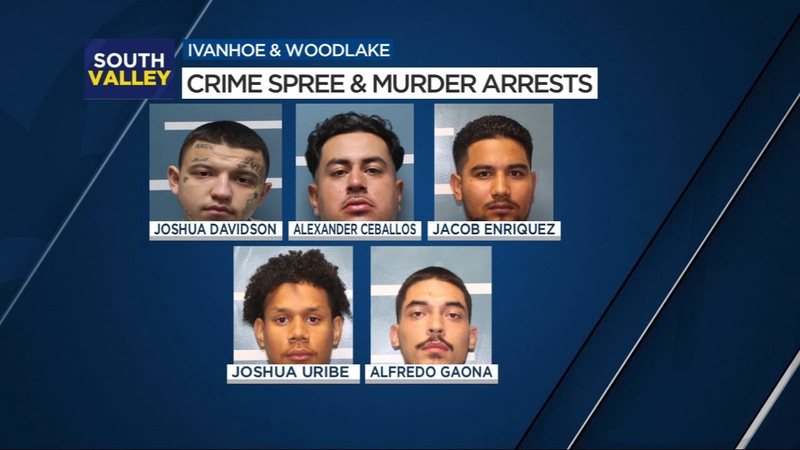 5 arrested in connection with violent crime spree in Tulare County

TULARE COUNTY, Calif. (KFSN) -- Five men are in custody after being connected to a violent crime spree in the South Valley.

Three of those five are also facing charges for the murder of a man near Ivanhoe.

Joshua Davidson of Visalia, Alexander Ceballos of Porterville, and Jacob Enriquez of Tulare are accused of killing 19-year old Ivan Ortiz of Delano.

On Monday night at about 11:30, Tulare County Sheriff's deputies found Ortiz shot to death outside a home on Road 156 near Avenue 320.

Then on Wednesday, detectives learned that the three men, along with Joshua Uribe of Goshen and Alfredo Gaona of Visalia, also went on a crime spree this past Monday night.

The five men started in Ivanhoe, where they committed a strong-armed robbery on a victim sitting in his car.

Then they drove to Woodlake, where a victim reported the men pulled out a gun.

From there, they moved to another area of Woodlake, where they carjacked someone at gunpoint.

Deputies tracked Uribe and Gaona down in the stolen truck and arrested them for the carjacking and armed robbery.

While Uribe and Gaona were being arrested, deputies were dispatched to Ivanhoe for the murder of Ortiz.

Earlier this week, Davidson, Ceballos, and Enriquez were arrested for Ortiz's murder.

All three were also charged for the strong-armed robbery and the carjacking in Woodlake.

This is still an active investigation and a motive for the attack has not been released.