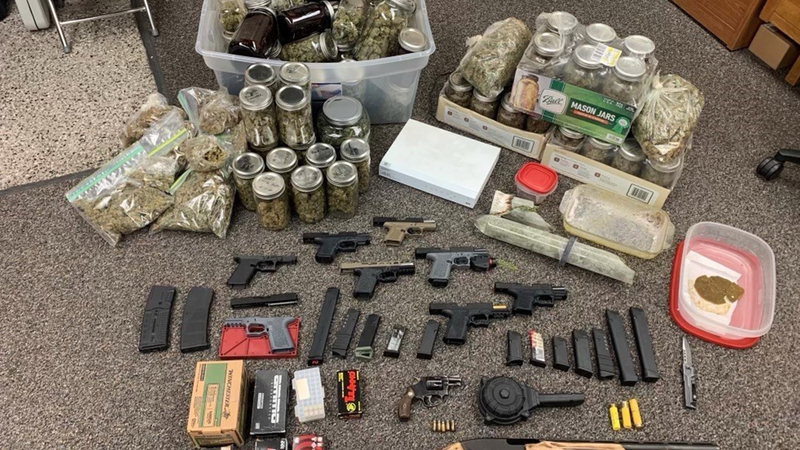 The explosion happened at the house in the area of Claremont Road and Avenue 169 just after 3 on Saturday afternoon.

Several witnesses called 911 after they saw fire and smoke coming from inside the home.

The two injured men, 59-year-old Clyde Gilbert and his 37-year-old son, Clint Gilbert, were burned so badly in the blast that they were first rushed to Kaweah Health Medical Center, then airlifted to a Fresno-area hospital for further medical treatment.

Authorities say they soon discovered Clyde Gilbert's two other sons, 32-year-old Shane Gilbert and 26-year-old Randall Gilbert, were illegally manufacturing firearms (ghost guns) without serial numbers. The two men live at the home but were not there at the time of the explosion.

Investigators say eight of the nine guns found at the home did not have serial numbers and were illegal to possess.

Shane and Randall Gilbert were arrested on several weapons charges.

Deputies say they will investigate further and interview Clyde and Clint Gilbert after they are released from the hospital.

If you have information about the case, you are urged to call the Tulare County Sheriff's Office at 559-733-6218
Report a correction or typo
Related topics:
tulare countywoodvilleillegal drugsexplosionguns
Copyright © 2022 KFSN-TV. All Rights Reserved.
TOP STORIES
Massive fire started by possible arsonist destroys Fresno home
Bicyclist killed by hit-and-run driver in Madera County
1 killed after car collides with semi in Fresno County
Reedley police officers fatally shoot suspect after chase, carjacking
ABC30 editor spotted suspect in Fresno Save Mart, alerted employees
More than 75,000 pounds of baby formula lands in US amid shortage
Fresno woman creating charcuterie-inspired treats for dogs
Show More
Pfizer: COVID vaccine for kids 6 months to 5 years old 80% effective
78,000 pounds of infant formula arrives in US
Biden: US would intervene with military to defend Taiwan
Fresno police catch suspect after he falls out of Save Mart ceiling
Something strange is happening with our universe: NASA
More TOP STORIES News