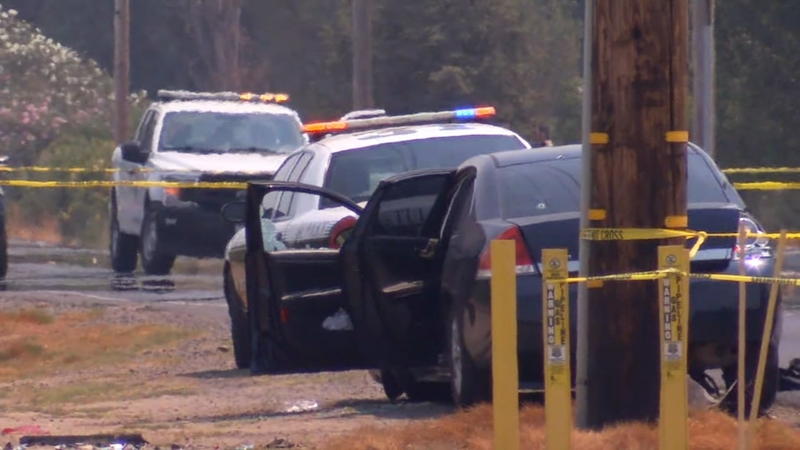 FRESNO, Calif. (KFSN) -- Detectives in Tulare are trying to figure out whether a strip mall shooting is connected to a pursuit and officer-involved shooting.

At about 9:30 Tuesday morning, Tulare Police say a man was shot while sitting his car, which was parked in the parking lot of a strip mall on Prosperity Avenue, near Hillman Street.

About an hour and a half after that shooting, police say one of their plainclothes detectives spotted a car matching the description of the one at the strip mall shooting.

The suspect car started to drive erratically, and a pursuit began when marked police units arrived to help the detective. During the chase, police say the suspects hit two other cars.

The second was a head-on crash on Prosperity Avenue, east of Mooney Boulevard.

After that crash, police say the suspect car came to a complete stop.

But before officers were able to get in position to do a traffic stop, police say the male passenger got out and started shooting at officers.

Three officers shot back, hitting both the male passenger and female driver.


"None of our officers were hit," said Tulare Police Sgt. Ed Hinojosa. "They're all safe and now at home with their loved ones, and the Tulare County Sheriff's Department is assisting us with conducting the investigation into the shooting."

Both suspects are being treated at area hospitals but expected to survive.

The man has been identified as 36-year-old Ignacio Lopez, who is accused of robbing a Fresno County bank three times and failing to show up for court after bailing out of jail.

The woman is 50-year-old Melissa Sarver, also of Fresno.

At this time it's still unknown if these suspects were involved in the earlier shooting at the strip mall parking lot.