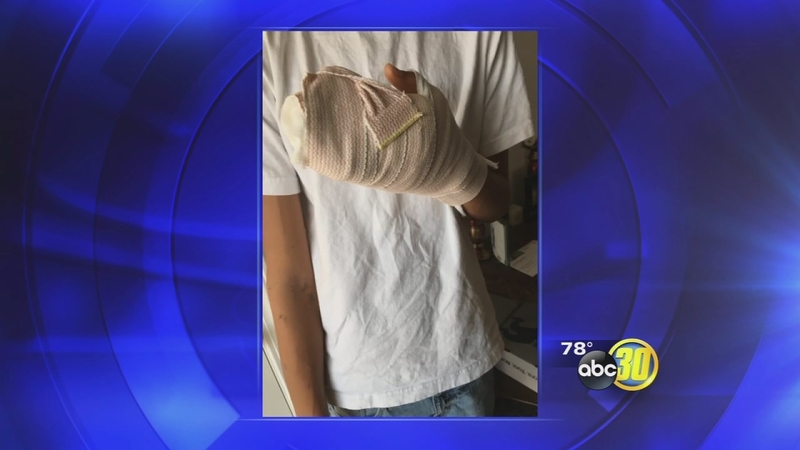 VISALIA, Calif. (KFSN) -- It was a nightmare of a situation for a 13-year-old Visalia teen who was infected with a flesh-eating bacteria-- possibly from his football helmet. Doctors caught it just in time and saved his hand and his mom is speaking out.

When Camil Flores shared the image of her son's hand on Facebook he was already in recovery from the flesh-eating bacteria, but his wound was severe.

"This happened just from a nick, from a helmet, from playing football."

Flores said the infection started on the practice field last week at El Diamante High School. Her son is a freshman and didn't think much of the cut, but within hours, she said, he got sick, he started vomiting and in the morning his finger was swollen.

"His finger was ten times the size of his other fingers."

"When the surgeon came in, she could not believe how severe his finger was. It was discolored, he couldn't feel it, the swelling increased and the antibiotics were just not working," said Flores.

Doctors said it was necrotizing fasciitis caused by a Strep-A infection. It could have led to amputation or even death.

Skadan said the district was notified by Flores, letters were sent home to parents about it, and football gear for all the high schools were wiped clean on Monday.

"It's unfortunate that it happened to this child, but we wanted to make sure that what we did, also for the safety of all of our athletes, that we took the necessary measures."

As for Flores' son, his hand was saved during surgery. The infection was cleaned out but there is a lot of damage. It's his dominant hand and Flores isn't sure if he'll be able to use it again and now his dreams of playing football are in limbo.

"It makes me feel really helpless that I can't do anything for my son and I can't take this away from him," said Flores.

She's hoping parents will hear about this story and hear her message.

"This can happen to anybody."