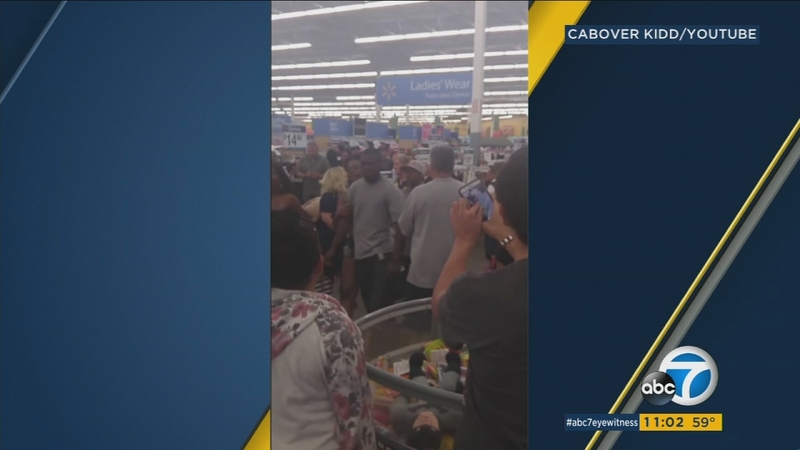 HESPERIA, Calif. -- One man was arrested and another is still at-large after an argument among customers at a Hesperia Walmart escalated into a brawl that was caught on video.

The argument started between two women at the 13401 Main St. store Saturday night.

Teri Nycum was in the checkout line when she heard the commotion and began filming with her cellphone.

"They were just pointing fingers, pushing each other," she recalled. "They just started fighting."

At one point, the video shows a woman fall to the ground. One man hits another man wearing a red shirt. Then a man wearing a gray shirt walks up and punches the man in the red shirt, knocking him unconscious.

San Bernardino County sheriff's deputies looked at surveillance video and found the man in the gray shirt, who was still in the store.

A man's knocked unconscious during a fight @Walmart in Hesperia. Deputies arrest one man. The story next at 11pm. Video by Teri Nycum. pic.twitter.com/UFF35uAo9w

He was arrested and later identified as Dashean Antwan Wages, 24, of Adelanto. He was booked for battery with serious injuries and bail was set at $100,000. Arraignment is scheduled for Tuesday.

The man in the red shirt has not been identified or located.

Nycum said she was nervous that the incident would escalate if anyone was armed. She says store employees did not help de-escalate the situation.

"Security was nowhere to be found," she said. "The employees were just watching. I think they should have at least helped the guy a little more."