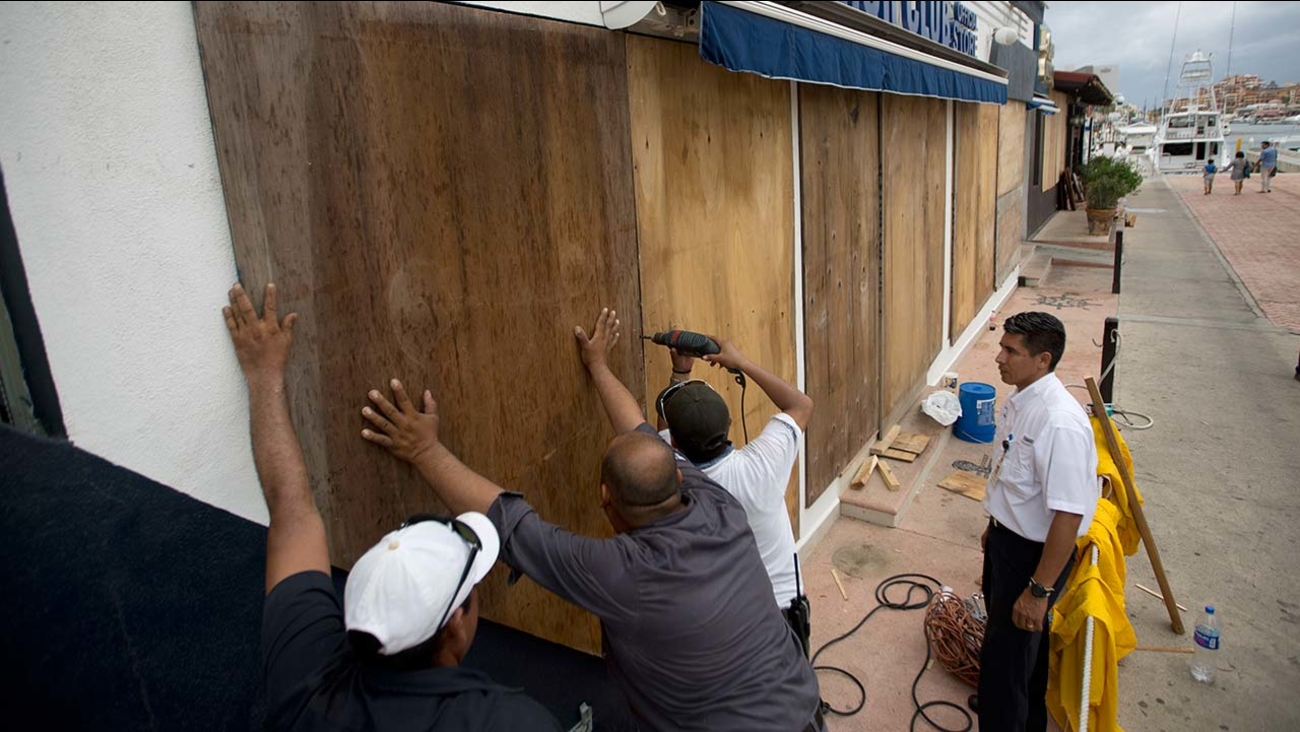 Workers board over a store front in preparation for Hurricane Newton, in Cabo San Lucas, Mexico, Monday Sept. 5, 2016. (Eduardo Verdugo)

CABO SAN LUCAS, Mexico -- Hurricane Newton slammed into the twin resorts of Los Cabos on the southern tip of Mexico's Baja California Tuesday morning, knocking out power in some places as stranded tourists huddled in their hotels.

Newton made landfall with winds of 90 mph (150 kph) early Tuesday, pelting the area near Cabo San Lucas with heavy rain and strong winds.

The hurricane blew down at least half a dozen palm trees along the coastal boulevard in Cabo San Lucas, and knocked out power in part of the resort city.

Newton then moved inland, retaining its winds almost unabated, and by early Tuesday was located about 50 miles (85 kilometers) northwest of Cabo San Lucas.

Mexico extended hurricane warnings for the Baja peninsula and even a stretch of mainland Pacific coast across the Sea of Cortez. The U.S. National Hurricane Center predicted Newton could cross the peninsula as a hurricane and re-enter the Gulf of California with hurricane force winds.

Coastal portions of five Mexican states could see 5 to 10 inches of rain, with isolated maximums of 15 inches, the hurricane center said. Newton could even reach the U.S. border at Arizona as a tropical storm, according to the latest forecasts.

Boat owners pulled fishing craft in from the water and business owners nailed boards and sheets of plywood over windows in Cabo San Lucas, the resort that was hammered by Category 3 Hurricane Odile in 2014. Officials warned that Newton might cause torrential rainfalls.

About 14,000 tourists remained in Los Cabos as of Monday night as airlines cancelled flights out as the storm approached, said Genaro Ruiz, the state tourism secretary. Ruiz said tourists had been advised to remain in their hotels.

"The most important thing is to stay at home," said Carlos Godinez, a civil defense official for Baja California Sur state. "If there is nothing that requires you to be outside, take shelter with your family."
Officials began evacuating residents from low-lying areas and opened 18 shelters at schools in the two resorts and 38 more in other parts of the state, while warning people against panic buying.

"There is no need for mass buying," Los Cabos Mayor Arturo de la Rosa Escalante said. "There is enough food and fuel for the next 20 days."

Los Cabos police were stationed at shopping malls to guard against the kind of looting that occurred after Hurricane Odile.

Earlier Monday, as a tropical storm, Newton dumped torrential rains that prompted some 100 people to evacuate their homes and damaged residences in Uruapan in the Pacific coast state of Michoacan, the city government reported.

Some roads were blocked by flooding and mudslides in the neighboring state of Guerrero, where some people were evacuated by helicopter. No deaths were reported in either state.

Newton was expected to move up the peninsula and enter the Gulf of California by Tuesday night. The hurricane center said the storm was likely to continue north and cross into southern Arizona as a tropical depression Wednesday night.