Fresno firefighters say it's been tough getting to emergencies quickly with limited visibility, especially at night.
KFSN
By Brittany Jacob 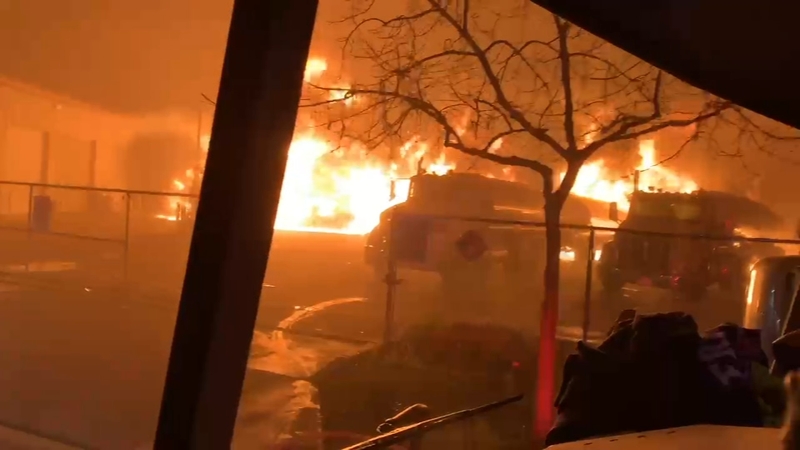 FRESNO, Calif. (KFSN) -- The thick fog that settled into the Central Valley is only adding another layer of difficulty to the job of first responders.

Fresno firefighters say it's been tough getting to emergencies quickly with limited visibility, especially at night.

"The lights and sirens, the lights themselves, actually makes it much more difficult to see at night, so we slow way down on our emergency response, and sometimes the lights will even cause problems responding to an emergency," said Shane Brown with the Fresno Fire.

The dense fog played a major role in delaying fire crews when a two-alarm fire broke out at Highway 99 and Olive overnight Sunday.

Fire officials tell Action News they received multiple calls to the area but they couldn't see the smoke coming from the storage yard at first because of the fog.

It took them several extra minutes just to locate the flames before they could attack the massive blaze as it tore through the yard and caused several tanks to explode.

CHP officers are responding to at least two times the normal amount of crashes daily because of this fog.

They're urging everyone to slow down on roadways all across the Central Valley.

Drivers must have their low beams on even during the day when there is fog.

On Valley highways, CHP officers are pacing at times to keep drivers as safe as possible.

"Speed is the leading cause of the crashes out there, we don't have that stopping distance, we don't have that clear-view clear vision of what's in front of us. The faster we go, the harder it is to stop or leave space between the vehicle that you're following," said Mike Salas with the California Highway Patrol.

If you ever feel unsafe driving, you're urged to pull off of the roadway and into a parking lot where you are safe.