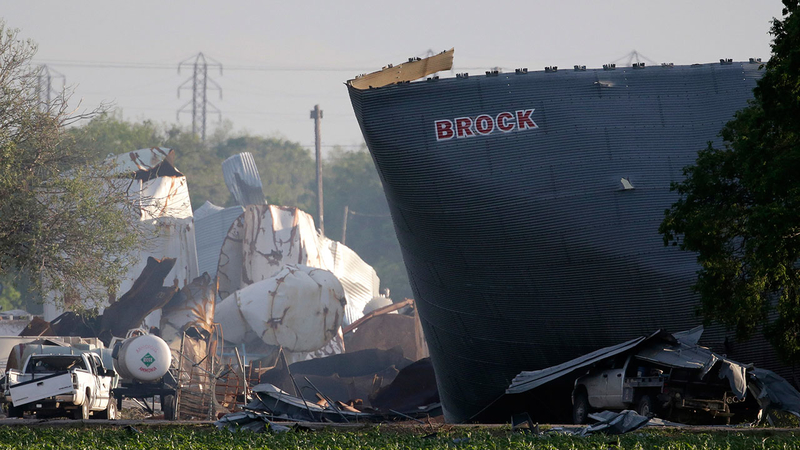 WEST, Texas -- Eight years after a massive explosion leveled portions of a central Texas town, left 15 dead and injured hundreds, the investigation into who was responsible remains open.

On April 17, 2013, firefighters responded to a fire at the West Fertilizer Company, a storage and distribution facility in West, Texas, a town of approximately 2,900 north of Waco. While crews worked to contain the fire, the site exploded, leveling homes, businesses and other buildings, including a nearby school.

Nearly three years after the blast, investigators with the Bureau of Alcohol, Tobacco, Firearms and Explosives said the fire was intentionally set and offered a $50,000 reward in the case.

The fire caused ammonium nitrate to ignite, triggering the blast that registered as a 2.1 magnitude tremor that was detected on seismographs as far away as Hockley, 142 miles away.

Alcohol, Tobacco, Firearms and Explosives special agent Robert Elder said in 2016 that investigators came to the conclusion after ruling out other reasonable causes, but he didn't release specifics or a possible motive. Inspectors have previously said three possible scenarios caused the fire: faulty electrical wiring, a short circuit in a golf cart stored at the plant, or arson.

"We have eliminated all reasonable accidental and natural causes," Elder said during a news conference at the time. "This was a criminal act."

"It is our highest priority to give victims of this tragedy an accurate explanation of what happened that day" in West, ATF Houston SAC

Federal regulators had previously issued a report that found inadequate emergency response coordination and training and careless storage of potentially explosive materials contributed to the blast, which left a crater 90 feet wide and 10 feet deep.

Federal regulators say the way the fertilizer was stored, with combustible materials nearby, and the lack of ventilation were contributing factors to the detonation. But they also cited a failure to conduct safety inspections of the plant, shortcomings in emergency response such as with hazmat training, and poor land planning that allowed development to sprout around the plant over the years.

Among those killed in the explosion were 12 emergency personnel, primarily ones with the West Volunteer Fire Department who responded to the initial blaze.

The Chemical Safety Board report approved by the board in 2016 said the response to the fire was flawed for various reasons, including for not establishing an incident command center and a lack of understanding about the possibility of a detonation. The report also noted that Texas had 80 plants that stored more than 5 tons of ammonium nitrate, a chemical used in fertilizer, and that 19 plants storing fertilizer-grade ammonium nitrate operated within a half-mile of a school, hospital or nursing home.

The West plant "was about 550 feet from the closest school, which sustained catastrophic damage as a result of the explosion, which could have resulted in additional loss of life had the school been in session at the time," the report noted. That explosion caused about $100 million in property damage, according to the Texas Department of Insurance, and insurance-related losses were approximately $230 million.