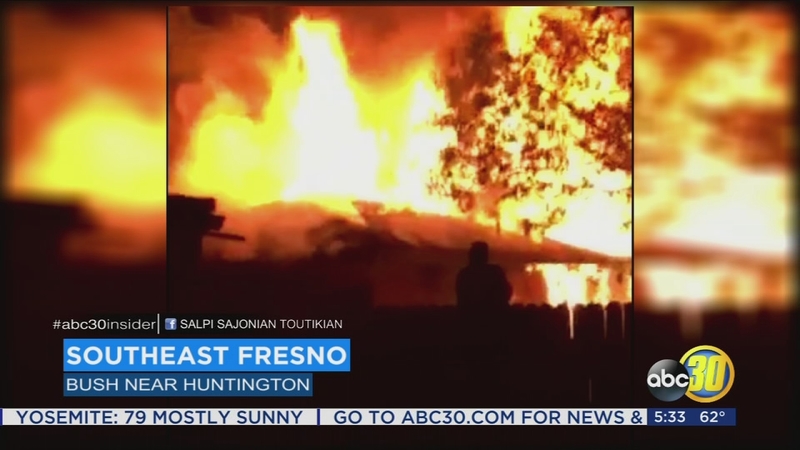 FRESNO, Calif. (KFSN) -- An abandoned home caught fire overnight creating a dramatic scene for neighbors and battling this fire was tough for firefighters.

Not only did crews have the house on fire but they had large trees, a power pole on fire in the backyard, plus a transformer nearby was having some issues because of the fire.

In a video shot by a viewer, you can see the home just being consumed by flames. A man can be seen grabbing a hose and climbing a ladder to water down their fence and trying to keep the flames away from their house.

In the video, you can also see firefighters on scene trying to put out the fire.

Witnesses said they heard explosions and firefights say those noises are consistent with household items like paint.

Firefighters took a defensive approach and fought the fire from the outside because it was so heavily involved when they got to the scene.

Fresno Fire Battalion Chief Lawrence French said, "Crews coming in saw 30 to 40-foot flame lengths coming off the fire while they were responding in. We also had a power pole that was involved. We have some primary transmission lines that were involved, electrical lines with high voltage that were involved. Anytime we have a fire with complexities and dynamic evolving incidents they aren't our usual, for lack of better term, fire."

Code enforcement will be out this morning to give the all-clear for firefighters to go inside the home to investigate. While they are pretty confident no one was inside they have not yet been able to go in to confirm that.

PG&E was on scene so firefighters can safely put out the power pole fire.