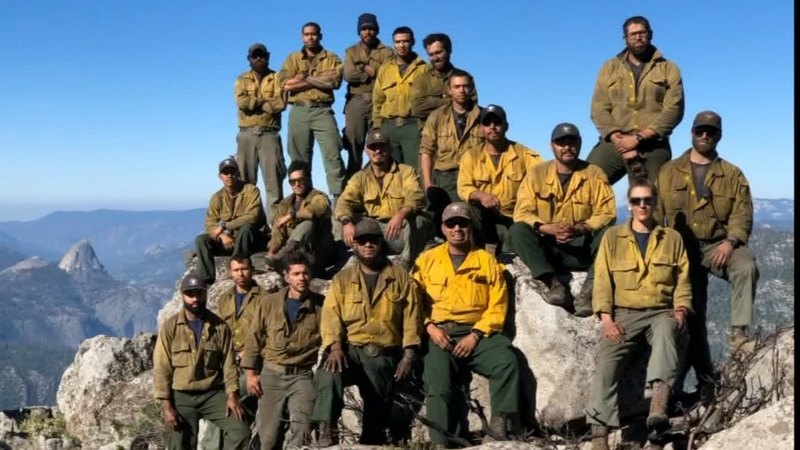 FRESNO, Calif. (KFSN) -- It takes courage to be a firefighter. Resilience to be a hotshot. And when one of your brothers dies in the line of duty, it takes strength to carry on.

"It's been a rollercoaster. We have our highs and our lows of sadness," said Arrowhead Hotshot Adrian Encinia.

33-year-old Brian Hughes was the Captain of the Arrowhead Hotshots. He was the leader of an elite firefighting force stationed inside Sequoia & Kings Canyon National Parks. He was a beacon of light teammates looked to in dark times, especially during the Ferguson Fire.

"We were getting our butts kicked on that fire. Just the elevation, the poison oak, just everything was getting to everybody," said Andrew Vogl.

After a particularly rough shift over the weekend, Brian rallied the troops early Sunday morning. The heartfelt speech was the last he'd give his men. Later that day, a tree fell on top of him as he fought to protect homes in Yosemite West.

"That morning Brian told us and you could hear the sincerity in his voice..."I'm so proud of you guys, you guys have laid it all out, you guys have done great."'
Those who knew Brian say he was exceptionally talented at predicting fire behavior. He had dreams of becoming a hotshot supervisor one day. He was also about to become a first-time father. His fiancé, Paige, was 3 months pregnant, and he'd often ask other fathers on the team for advice.

"If he was here, he'd probably be wondering why we're not at work right now, because that guy pushed us, it was well worth it," said Vogl.
His teammates insist the Arrowheads are still twenty strong. Brian's spirit and his fire will always burn in each of them.

Firefighters have set up a GoFundMe page for Brian's family. Additional information on his life and memorial are on the Sequoia Parks Conservancy Memorial Website.