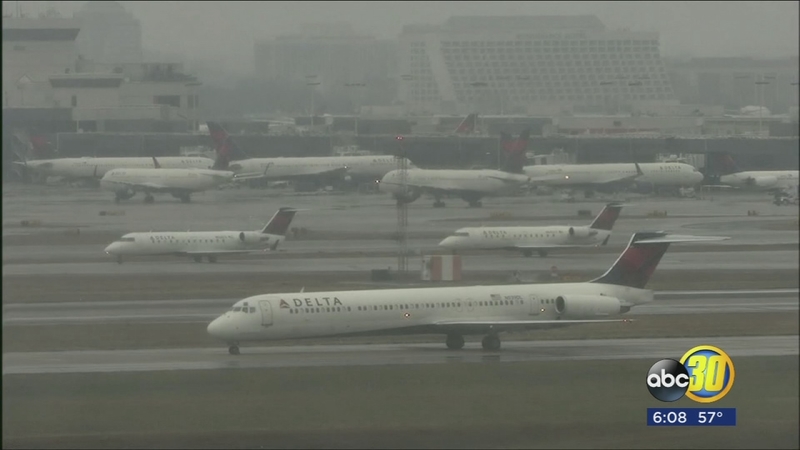 As many as 80 to 100 planes have been grounded at Atlanta's busy airport due to a power outage, ABC News confirmed.

Hartsfield-Jackson Atlanta International Airport, one of the world's busiest airports, suffered a power outage at around 1 p.m. Sunday. Airport personnel, Atlanta Fire and Rescue officials and Georgia Power staff are on the scene to respond and restore service, a spokesman told ABC News.

"I don't know how long its been out but we've been standing here in the dark for about 35 minutes," traveler Kate Murphy told ABC News.

Another traveler described the scary scene in the blackout inside the terminals.

"The lights flickered once. That was really scary," Muhammad Saeed said. "And then they flickered again and they didn't come back. And it's been about an hour now and it's just pitch darkness in the airport."

It's unclear how widespread the outage is or what caused it.

Ann Mason, who was traveling to South Bend Indiana, told ABC News she saw smoke coming from one of the terminals and that people were told to evacuate.

Multiple airlines, including Southwest and Delta Airlines, told ABC News they were beginning to deplane passengers by sliding them down airstairs.

Before this move, the FAA confirmed to ABC News there are up to 100 planes stuck on the tarmac.

The agency said that flights headed to the airport were grounded "due to the power outage," but also added that the airport's tower has power and is capable of operating "normally."

Delays are still expected to continue with the equipment failure at several terminals, the FAA official added.

The airport tweeted earlier that the outage had "impacted several areas in the airport" and that officials were "working to remedy the situation."

A power outage has impacted several areas in the airport. #ATL officials are working to remedy the situation. Additional updates to come

A representative of Delta Airlines, which uses the airport as a central hub, stated that "diversions are in progress" for flights that were already in the air and headed to Atlanta.

The airline rep told ABC News that there are jets sitting on the tarmac waiting to taxi to various gates.

Thomas Guzik tweeted that he was being rescued from the sky train by firefighters.

The fire dept is getting us off Sky Train!

And cartoonist Dave Trumbore also took to Twitter, but has been jovial about the situation.

"This started as a joke but the flight attendants *quite honestly and literally* just said they have no snacks left and have rationed us a half-cup of water each!" he wrote.

Fun fact: Every airplane has a floor-to-ceiling aquarium/aquaculture system, but it's only accessible to Adamantium Medallion members.