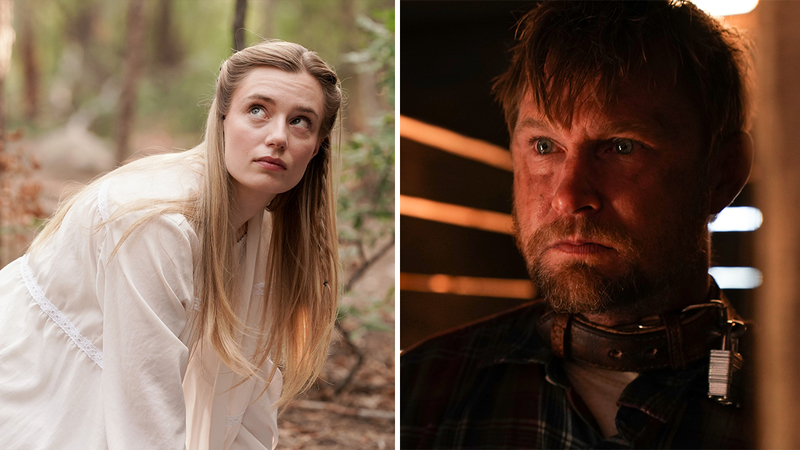 They're being held captive on the ranch of Rick Legarski's twin brother, Wolfgang.

Brian Geraghty (Ronald) and Anja Savcic (Scarlet) say it's great to be working with John Carroll Lynch (Wolfgang, Rick Legarski) again after his character, Rick, was killed off.

"I loved being a part of this show and working with Brian is awesome, we have a really good vibe together and now with Romi and John on set with us and in our little ranch where we're kind of separated it's a really good time," Savcic said.

Geraghty said the sudden appearance of an identical twin brother wasn't too soap-opera-like.

"I think they were just trying to figure out a way to bring him back honestly. Because I think they could feel the absence of him and people really felt like it was a bit even premature because we just got to know and love this character and we got to continue on with Ronald for six, seven episodes, or whatever it was," Geraghty said. "So, no, I think the way they did it was great fun, particularly for John because he gets to play this totally different opposing character in a way to his brother."

Viewers may be wondering where is Scarlet's child? That info is still to come she said, noting that Scarlet is a very smart and fierce woman, so there are still surprises on the horizon from her.

When the season first began, people might have been surprised to see Ronald's new farm look. It's one of many he's had during his time on the show. But Geraghty revealed his favorite.

"I think one of the favorites was when he decided that he was going to dye his hair black to evade the police. I love that. I thought it was hilarious and ridiculous," he said. "Like, oh yeah, I'll just dye my hair black and no one will know who I am."

A newcomer to the cast this season is Jamie-Lynn Sigler, best known for her role on "The Sopranos." She's playing "Tonya" a waitress at the local diner and is the girlfriend of a man involved in a dangerous drug ring.

Interestingly enough, one of Geraghty's first roles was playing a "counter boy" on "The Sopranos."

However, their storylines haven't converged just yet, and neither has their time on set.

"But no, we haven't seen each other on set and I don't know that she would remember me as I was a guest in a one-day role," Geraghty said.

Tonya was recently kidnapped at the end of episode two with Jenny and Cassie hot on the trail, and you won't want to miss what's coming up next for Ronald and Scarlet, Geraghty and Savcic said.

"Big Sky" airs Thursdays at 10 p.m. EDT on ABC. You can watch episodes on-demand and on Hulu the day following their premieres.

The clock is ticking... Find out where #BigSky will take them tomorrow on ABC and Stream on Hulu. pic.twitter.com/AYvuhBx9Q7