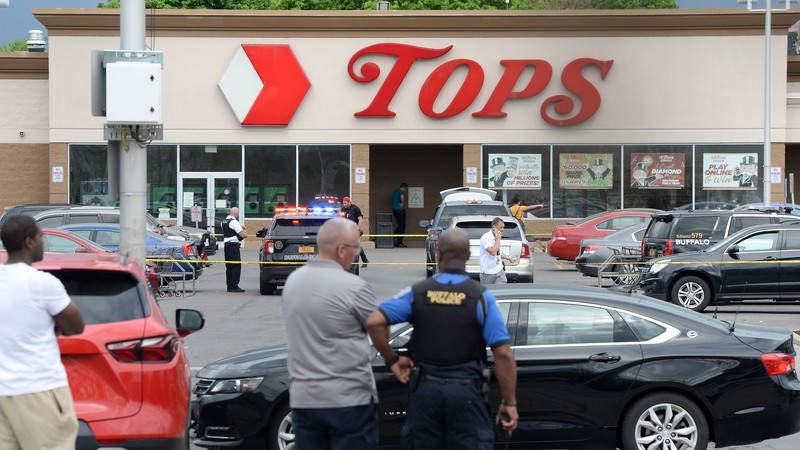 BUFFALO, New York -- A 911 dispatcher who mishandled a call from a Buffalo supermarket manager during the fatal May shooting was fired on Thursday, the Erie County Department of Personnel confirmed to CNN.

The 911 dispatcher, whose name was not released, had been on paid administrative leave since May 16, the department confirmed. A hearing was held on May 30 to "terminate the 911 call taker who acted totally inappropriately, not following protocol," according to County Executive Mark Poloncarz.

Latisha Rogers, the assistant office manager at the Tops Friendly Markets in Buffalo, was working at the store when an 18-year-old White gunman entered and began firing. The gunman, whose rampage authorities say was fueled by racist hate, shot 13 people, 10 of whom died.

Rogers was at the supermarket's service desk with two coworkers while on the phone with a customer, when she heard "large booms" in quick succession, she told CNN.

"I look up out the window and I saw this customer, this lady with her shopping cart -- she just stopped -- and she just had this really funny look on her face and then she just turned to run," Rogers said.

"Next thing you know, you just keep hearing boom, boom, boom," she said. "All we could do was just drop to the ground."

Rogers hid behind the counter, "praying that he didn't see me," she said of the shooter. She reached into her back pocket to grab her phone and dialed 911. The dispatcher, Rogers said, asked her why she was whispering during the call.
In part, Rogers said, "Please send help, there's a person in the store shooting."

"'What? I can't hear you,'" the dispatcher responded. "'Why are you whispering? You don't have to whisper, they can't hear you.'"

The dispatcher handled her call so dismissively that it has compounded Rogers' trauma, she told CNN.

Central Police Services went through all calls associated with the shooting, Poloncarz said, adding, "They identified this one call, the issue associated with it, it was completely unacceptable."

Poloncarz previously said that it wasn't clear who ended the call, but "the 911 operator was inappropriate."
"We teach our 911 call takers that if someone is whispering, it probably means they are in trouble," Poloncarz said at the time.

The caller, he added, may be in "an area of concern, not just with regards to active shooters but potentially with regards to domestic violence that someone may be calling."
Report a correction or typo
Related topics:
new york911 callfatal shootingsupermarket
TOP STORIES
Tax refunds for CA: Here's what's included in new relief package
3 dead, at least 50 injured after Amtrak train derails in Missouri
Abortion protections to be on California ballot in fall
Target, Walmart weigh paying you not to bring back unwanted items
Nelson Esparza dropping defamation lawsuit against Garry Bredefeld
Visalia police searching for missing 72-year-old woman
Man killed in early morning shooting in Atwater, police say
Show More
Explosion at popular Fresno food truck injures 2, including minor
Lake Kaweah updates 'no wake zone' after dock failure caused by storms
Fowler Ave. from Olive to Clinton to be closed until September
SCOTUS sides with football coach who wanted to pray on the field
Tips to keep your dogs safe during Valley triple-digit heat
More TOP STORIES News