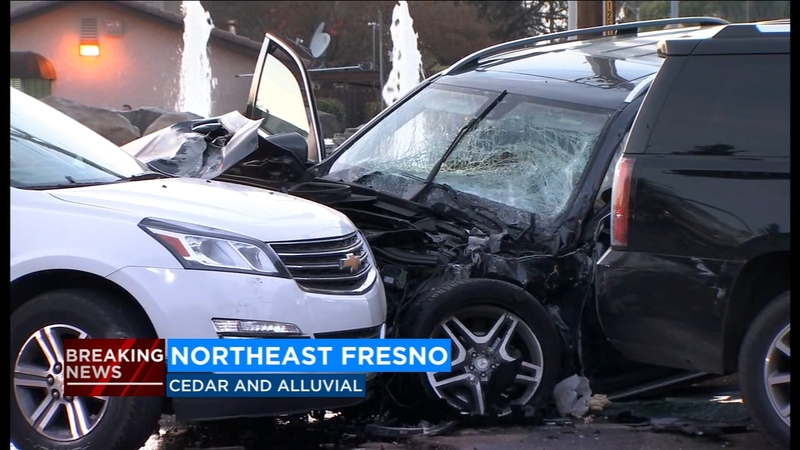 FRESNO, Calif. (KFSN) -- A FAX bus and several vehicles were involved in a serious accident in northeast Fresno on Thursday evening.

#BREAKING: FAX bus and four other cars involved in accident in northeast Fresno near Cedar & Alluvial. According to @FresnoPolice everyone involved has minor injuries. Waiting for official update @ABC30 pic.twitter.com/cOqTE1Jk7C

The accident occurred at the intersection of Cedar and Alluvial.

According to Fresno Police, the bus driver was traveling southbound on Cedar when he was distracted by talking to a passenger and ran a red light.

The bus and the SUV then pushed into three other vehicles that were in the left lane getting ready to turn left on Alluvial.

Two adults and two children and a driver were on the bus. Two of the adults were taken to a hospital, along with one of the children. The extent of their injuries is unclear.

A woman driving one of the SUVs involved in the accident had her 3-year-old in the car and said she was very frightened when the accident occurred.

A 16-year-old who was on the bus described the horror of the moment.

"I was having a panic attack, we were freaking out trying to figure out how to get off the bus," he said.

The windshield of the bus came out as a result of the impact.