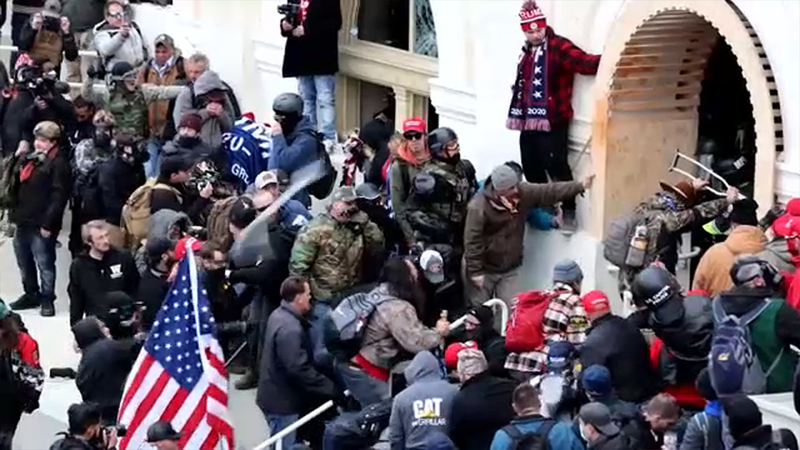 FRESNO, Calif. (KFSN) -- A moment of reflection Thursday in the nation's Capitol and around the country as ceremonies were held marking one year since the deadly assault on the U.S. Capitol.

President Joe Biden delivered a forceful speech one year after a mob of Donald Trump supporters attempted to block the certification of his presidency.

"Those who stormed this Capitol, and those who instigated and incited, and those who called on them to do so, held a dagger at the throat of America," said President Joe Biden.

Without saying the former president's name, President Biden called Trump out for spreading lies about the 2020 election results and trying to prevent a peaceful transfer of power.

Former President Trump released a statement responding to President Biden's speech, but his comments only repeated his previous false claims about election fraud.

Local Congressman Jim Costa was in the joint session of Congress to certify the electoral college vote last year when the Capitol was overrun.

Costa was shown in an Associated Press photo sheltering in place.

"It was the saddest, saddest day in modern history, I think," said Fresno Congressman Jim Costa.

In a press conference Thursday, Costa reflected on that day and expressed pride in the work being done by the Select Committee and attorney general to determine the facts and hold people accountable.

"We must get to the bottom of this, to ensure that this never, ever happens again in our country," Costa said.

Central Valley Congressman David Valadao was one of only 10 republicans who voted to impeach President Donald Trump for incitement of insurrection.

His office declined an interview with Action News Thursday.

Saying in part, "Our Capitol should never be compromised and those who broke the law deserve to face legal repercussions and full accountability."

McCarthy also claimed democrats are using what happened that day as a "partisan political weapon" to further divide the country.

In a rare speech Wednesday, Attorney General Merrick Garland vowed to hold those responsible "at any level" accountable for the deadly attack.