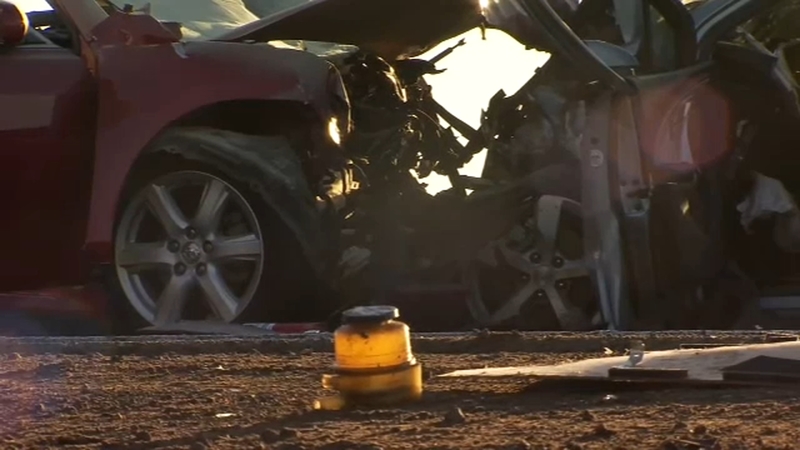 KINGS COUNTY, Calif. (KFSN) -- Two California Department of Corrections and Rehabilitation officers were involved in a deadly head-on crash in Kings County, according to the California Highway Patrol.

The crash happened in Kings County near Avenal Cutoff Road and Gale Avenue, killing one of the officers and injuring the other, at around 6 a.m.

Officers say a woman driving a red Toyota Camry was heading southbound on Avenal Cutoff when the vehicle in front of her started to pass another car. She decided to follow behind. During the passing maneuver, the car in front of her completed the pass but she did not, colliding head-on with a Chevy Volt.

The man driving the Chevy, 29-year-old Jesus Vega, was airlifted to CRMC where he is in critical condition.

The 41-year-old Hanford woman was pronounced dead at the scene.

CDCR says one officer worked at Pleasant Valley State Prison and the other at Avenal State Prison.

Here's the statement CDCR released in response to this tragic crash:

"CDCR can confirm that two people involved in the fatal Kings County crash that occurred this morning are CDCR employees, one an officer at Pleasant Valley State Prison and the other an officer at Avenal State Prison. We are devastated to hear this news and the entire CDCR family is sending our comfort and support to staff at the prisons as well as the family and friends of the employees involved."

Action News spoke with a woman who says she witnessed the crash and rushed over to help.

"They were trying break open both of the windows for both cars because the windows were up and we couldn't open the door to them. But once we were able to get to the other car, they were trying to get her out, that's when they saw she didn't have a pulse anymore," she said.