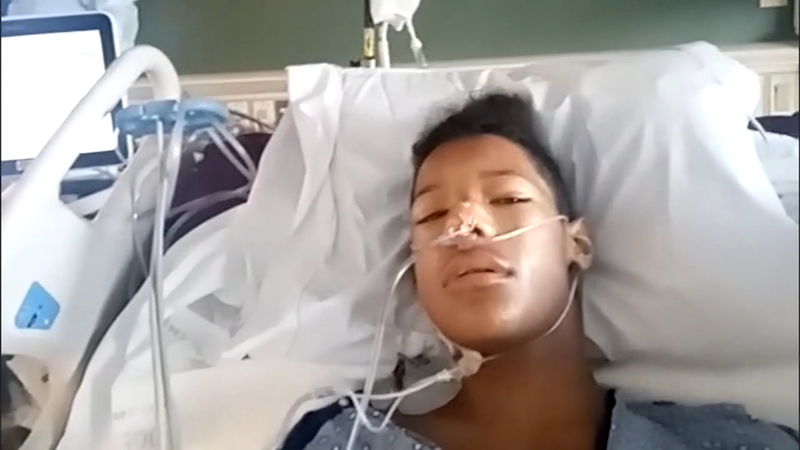 Barely able to speak from his hospital bed, 13-year-old Jabari Gomez is still in pain and disbelief.

He's slowly recovering in the intensive care unit after being shot Tuesday night.

"He's such a good boy, he doesn't deserve this," says his mom, Jessica Salazar. She says Gomez was shot in the abdomen, and there is damage to his liver and lung.

Fresno Police say the alleged shooter, a 15-year-old, is now in custody.

It happened at Golden Garden apartments near Marks and McKinley.

Gomez and his siblings were visiting friends when investigators say a fight broke out between Gomez and another group of kids. One ultimately pulled out a gun and shot the victim at least once.

Hours after the shooting, investigators found the teen suspect and the gun several miles from the scene of the crime near First and Dakota.

Police can't confirm a motive, but Gomez says he's encountered some of the teens involved several months ago when he tried to stop them from throwing rocks at a homeless person.

"My son works so hard to make everybody here happy. He didn't deserve it," says his father, Jabari Gomez Sr.

Gomez Sr., in tears, says his son is a respectful and caring young teen.

He's a beloved basketball player at the Kepler Neighborhood school, as well as for the JMJ Youth Services team.

"Jabari helps anybody. He has the biggest heart. A kid that doesn't get in trouble, gets good grades - that's the kid we're dealing with, not a kid that's in gangs or on drugs," Kepler Neighborhood School Coach Elliott Murray says.

Gomez Sr. says he feels for the 15-year-old suspect as well.

"I wish I could help that kid. I hope his parents are there for him more than ever... I'm just sorry it happened to my son," he says.

The youth services group is now trying to help the family with donations, as Gomez's father is displaced and the victim will need extra help when he's able to come home.

As the 13-year-old recovers, Jabari's mom hopes for an end to gun violence so no other family will have to go through what she's going through.

"You never want to see your kid like this, never," Salazar says.

Jabari has a long road to recovery but a message of hope for his loved ones.

The suspect will likely face several felony charges, including assault with a deadly weapon.