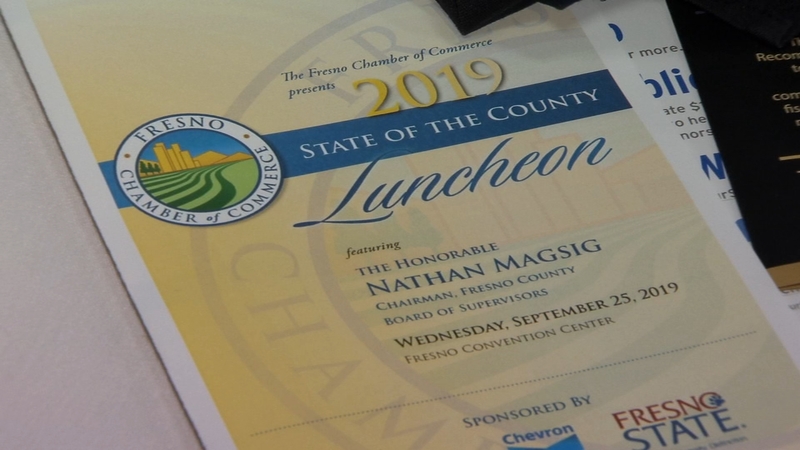 FRESNO, Calif. (KFSN) -- It was a full house at this year's State of the County luncheon.

Leaders and members of the community filled the Fresno Convention Center to hear about the positive impact being made in Fresno County.

"We may have secured the number one top spot as again being recognized as the number one agricultural producing region in the world," said Fresno County Supervisor Nathan Magsig.

Homelessness was on the agenda. During this summer the Fresno- Madera Continuum of Care reported there were more than 1,400 people who were homeless within the city of Fresno and nearly 650 in the county.

Earlier this year the county developed a 14-point plan.

"Our goal is to take homeless from the condition they are in right now and into a position where they can become productive and self-sustaining again," Magsig said.

Another way of alleviating the issue is through affordable housing and more is on the way.

The sale of the University Medical Campus off Cedar Avenue and Kings Canyon Road was approved. The promise is to convert the unused hospital into 800 housing units.

"The county has continued to pay the bill for maintenance at that site and just ongoing security which cost sometimes over $1 million dollars a year," Magsig said.

A new county animal shelter is also in the works.

Currently, those services are being run out of an old morgue that's much too small for operations.

The new facility will be built in central Fresno.

"We are in the process of developing plans right now and hopefully in the next six to eight months we will be in a position where we can stick shovels in the ground and start building the facility," Magsig said.

Improvements in education were also highlighted.

Two new libraries are planned one for Clovis, another for Reedley.