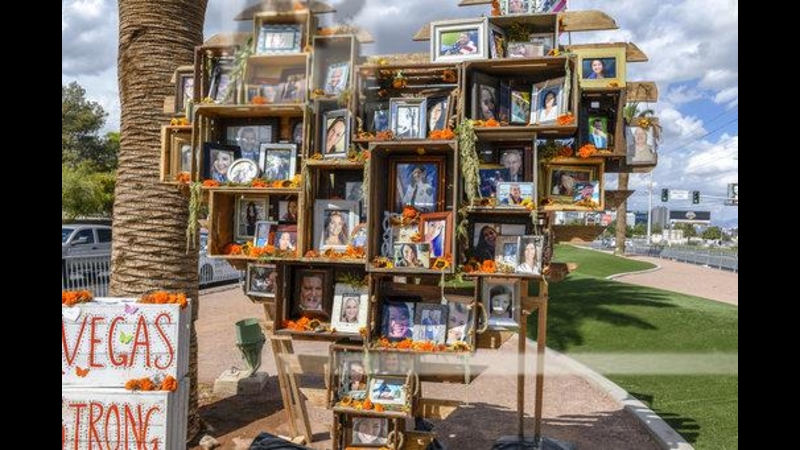 LAS VEGAS (KFSN) -- Las Vegas mass shooting survivors are coming together on a somber anniversary to remember the 58 people who died and take stock of their own lives.

Spread across the lawn of the Las Vegas healing garden are the compatriots of the 58 people who sided in the mass shooting one year ago the survivors.

Burns made it out of the route 91 harvest festival safely, but her journey through the photos in the garden is a reminder of how even the people who lived came out of the concert with invisible injuries.

October 1 will always be a dark day for the City of Lights, but coming up on @ABC30 Live at Five, the positives of the tragic anniversary: Camaraderie, caring, new friendships/families forming over shared trauma. pic.twitter.com/79eaV7UGwg

"We focus in on these 58 and that's unimaginable but there are so many other people who were hurt and are still injured and still surviving," said shooting survivor Lisa Hayes.

Destene Albers planted her memories in the garden in the form of a clock with 58 names as hands, a timepiece always stuck at 10:05 - the moment the shooter opened fire from Mandalay Bay.

Destene helped rescue Sanger native Jessica Milam after she took a bullet and now she's facing her fears and encouraging other survivors to keep up with their mental health.

"It's one of the hardest things I had to learn is learning it's okay sometimes to not be OK," said shooting survivor Destene Albers.

The anniversary acted like a magnet for survivors who needed to see tributes like the portraits artists drew for each of the victims or the Crosses for Losses on the Vegas Strip, right in the shadow of Mandalay Bay.

But most of all, they needed to let the emotions of the last year wash over them.

"I think this whole year you kind of don't want to forget it but life just had to happen and today's the first day you just have to feel it," said survivor Kylee White.
Report a correction or typo
Related topics:
community & eventslas vegasmass shootinglas vegaslas vegas mass shooting
Copyright © 2021 KFSN-TV. All Rights Reserved.
LAS VEGAS MASS SHOOTING