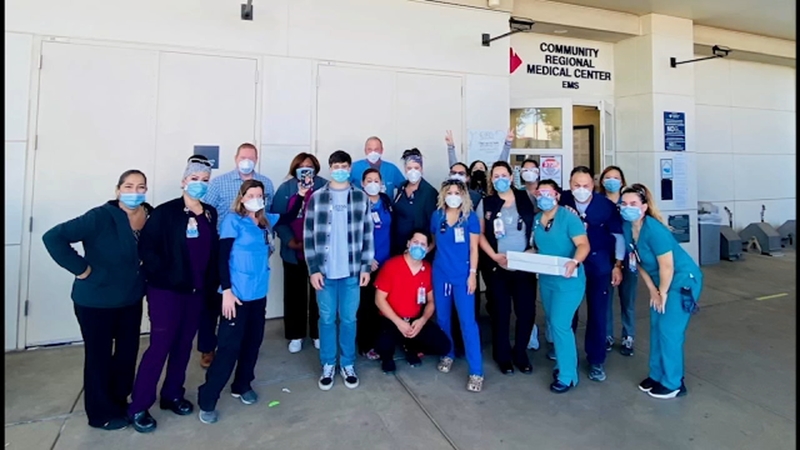 FRESNO, Calif. (KFSN) -- A teenager who collapsed on a Fresno football field during practice a year ago returned to Community Regional Medical Center to thank staffers who saved his life and nursed him back to health.

Anthony Montoya's heart stopped beating that day, so he knows his recovery beat the odds.

During his stay at CRMC, Anthony remembered how RN Garrett Partain could always make him laugh.

The 17-year-old recalled, "He's one of the first voices I remember when I first woke up."

That was more than two weeks after he was admitted to the hospital in October of last year.

Montoya blacked out on the San Joaquin Memorial High football field during practice.

Anthony said, "Your whole body shuts down. You just, you're done."

By the time his parents arrived at CRMC, Anthony was on life support.

His mother, Ashley Montoya, said, "He just went into acute cardiac arrest and went without oxygen for about 25-plus minutes."

Ashley said, "We didn't know if he was going to wake up or walk or talk."

His teammates at Memorial and friends from other schools prayed for his recovery.

Mom said she had a vision. "I kept seeing us walking out of the trauma unit."

21 days after he was admitted, Anthony and his mother walked out of the hospital.

One year later after that triumphant moment, they came back to thank the CRMC staff.

The family even brought donuts for everyone.

Dr. Vargas praised the coaches who treated Anthony and gave him CPR before paramedics arrived.

He explained, "Your classmates and your team, they did an amazing job. A lot of work here but they gave us all the time that we needed to get you back into shape."

Montoya said, "It was a pretty surreal moment being back here."

Anthony's mom was grateful her prayers were answered.

Ashley Montoya said, "Of course, by the grace of God. Just had His hand and walked him through everything he needed to get through."

She added her son didn't have any heart issues prior to his medical episode.