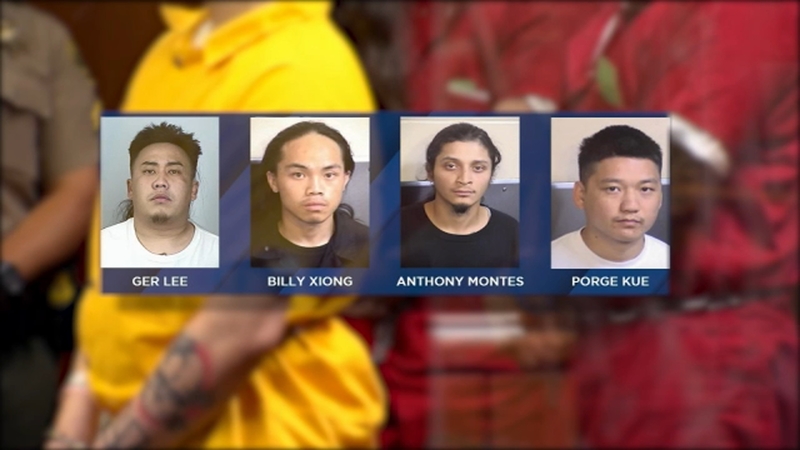 FRESNO, Calif. (KFSN) -- A months-long preliminary hearing for four murder suspects is drawing to a close this week.

That's when they say they found a Glock pistol connected to a mass shooting that killed four people, and started to build a stronger case against the suspects.

Before that, a series of stunned witnesses to the 2019 killings told Fresno police they couldn't see who did it and had no idea why anyone would've targeted their backyard football watching party.

A fun November day watching football with friends took a nightmarish turn when a group of gunmen appeared from the darkness and opened fire in an east central Fresno backyard.

Most witnesses told police similar stories about their limited views.

"He saw two separate sets of muzzle flashes, but no figures, no bodies, and no face," said Sgt. Melanie Mayo of one of the witnesses she interviewed.

Police say they were gang members trying to get revenge for the murder of Randy Xiong earlier the same day.

But investigators say only one person who attended the party -- one of the four people killed -- might've had an affiliation with the rival gang.

"There were rumors that when he was younger, he used to hang out with a gang," Sgt. Mayo said witnesses told her about the man.

RELATED: 4 men accused in deadly mass shooting in Fresno back in court

None of them seemed to know why they were targeted.

"They had no knowledge of any gang issues or personal issues that would have caused people to shoot all their friends and family," Sgt. Mayo said.

The preliminary hearing is expected to wrap up by the end of this week and then the judge will decide whether there's enough evidence for the four suspects to stand trial.
Report a correction or typo
Related topics:
fresnomass shooting
Copyright © 2022 KFSN-TV. All Rights Reserved.
TOP STORIES
Heavy law enforcement activity near Reedley, roadways closed off
78,000 pounds of infant formula arrives in US
Fresno police catch suspect after he falls out of Save Mart ceiling
ABC30 editor spotted suspect in Fresno Save Mart, alerted employees
Something strange is happening with our universe: NASA
Woman badly burned after Hanford home catches fire
Wisconsin couple kills bear that attacked them in their home
Show More
A new billionaire has been minted nearly every day during the pandemic
Fate of 2,500 Ukrainian POWs from steel plant stirs concern
Man drowns in Lost Lake in Fresno County
Hanford police officer, K9 hospitalized after exposure to fentanyl
Merced Co. offers free culinary classes for students of all abilities
More TOP STORIES News