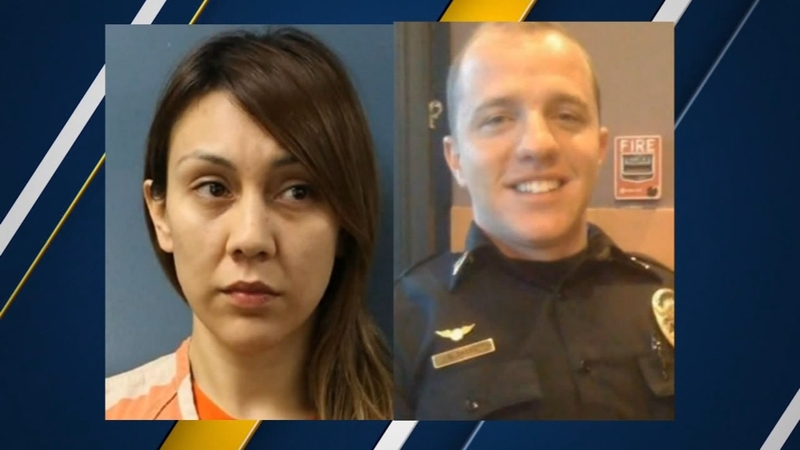 VISALIA, Calif. (KFSN) -- A Tulare County judge declared a mistrial on Tuesday in the murder trial of Erika Sandoval.

Jurors in the case deliberated for about four days.

On Monday, the Tulare County District Attorney's office requested that one juror be replaced with an alternate juror.

But the judge kept the jury intact, and they continued deliberating until Tuesday morning.

Just before noon on Tuesday, Judge Joseph Kalashian declared a mistrial in the case, after jurors told the court they couldn't come to a conclusion on 'murder one'-meaning the first degree murder charge filed against Sandoval.

According to the jury, only one member opposed the decision to convict.

The other eleven supported a conviction.

Sandoval was arrested and charged with the murder of her ex-husband and Exeter Police Officer Daniel Green in February 2015.

The trial didn't start until October of this year.

There were dozens of witnesses, hours of audio and video recordings, and shocking twists-like when Sandoval testified that she found child pornography in Green's safe minutes before she shot him to death.

The DA's office says the photos were never found.

But Sandoval's defense attorney says there were other photos, similar in nature, that corroborate her story.

"We were trying Ms. Sandoval for the murder of Mr. Green and it seemed at times this trial took a different turn," Ward said. "And that was almost trying to murder the memory of Mr. Green. And I can only imagine how tough that was for his family to have to sit and listen to that."

RELATED: Erika Sandoval continues to testify in her own murder trial

Ward says the final tally - 11 to one jurors favoring a conviction - supports the strong evidence they presented at trial.

Sandoval's attorney says he plans to keep fighting for his client.

"I told her, I said, 'You know, it doesn't feel like a win right now, but give it a few days, and you'll see that you're going to live to fight another day and that's a win compared to what you were facing,'" Dan Chambers said.

On Tuesday, the judge commended the jury for the time and effort they put into the case.

"That person had their own view of the evidence," he said. "It has to be respected. You don't have to agree with it. But you have to respect it and you can't simply write it off as 'Well, that person just didn't know what they were doing, or they felt sorry for Erika.'"