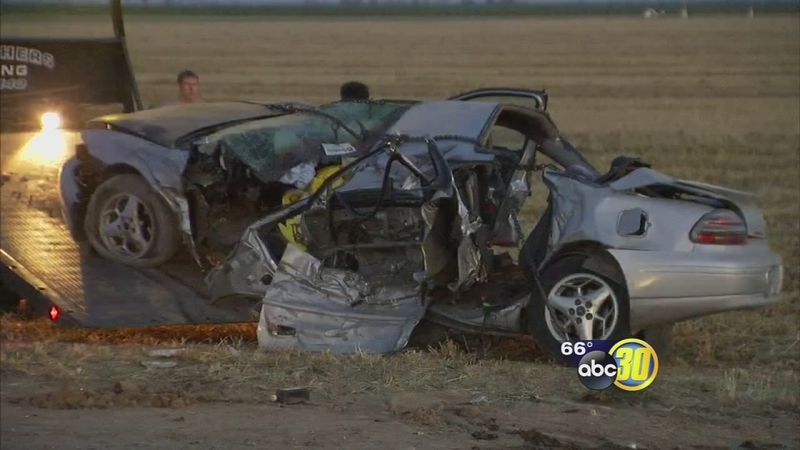 Two people were killed and several others were injured Saturday afternoon when two cars collided in Fresno County, according to the California Highway Patrol.

Authorities say a Pontiac Grand Prix ran a stop sign and slammed into a black Chevrolet S-10 pickup around 5:50 p.m. at Henderson Road and West Lincoln Avenue near Raisin City.

Miguel Real was first on the scene to help the seven people who were involved in the deadly crash.

"I didn't hear any brakes," Miguel said through an interpreter. "Just heard the sound of the crash and saw the car spinning around in the dirt."

Corina Real says her dad also rushed over to help.

"My dad was the one who checked the pulse of the young man in the back, and he said he didn't feel the pulse," she explained.

The two killed were riding in the Pontiac along with two others. Three people, including a boy, were in the Chevrolet, but he was not seriously hurt.

Officers say the driver of the truck did what he could to stop.

"It happened suddenly," Sgt. Manuel Peregrina with the CHP said. "He tried to brake but wasn't able to."

One injured person was airlifted to Community Regional Medical Center by helicopter for treatment.

Neighbors say the stop sign has been the scene of many accidents before.

"They think that just because it's a small street that they can go flying by sometimes," Corina said. "Just takes a few seconds to stop at the stop sign and people choose to run."