KGO
By by Tiffany Wilson 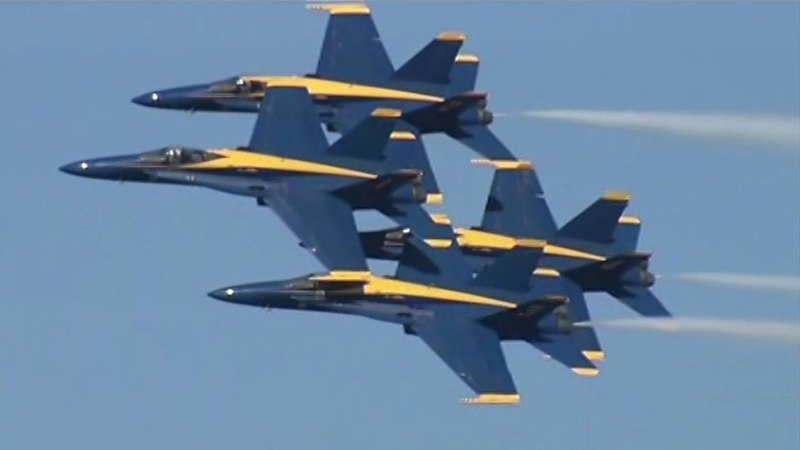 SAN FRANCISCO -- It was another gorgeous day for the second Fleet Week air show, featuring the Blue Angels.

Thousands of families poured into San Francisco to watch the aerial acrobatics and admire the heart stopping twists and turns on Sunday.

Daredevil pilots soared into the heavens and shot off across the sky, with formations shifting on the fly.

All kinds of aircraft streamed across the horizon, some leaving smoke in their wake.

"I'm excited for the Blue Angels show, they're flying soon and even us in the service, we geek out on that," US Navy Lt. Clark Petri said.

"Definitely the Blue Angles, they stole the show yesterday and I'm sure they'll do it again today," one woman said.

She was right because the Blue Angels stole the show once again, but many families arrived early to explore other attractions like a US Coast Guard boat and a Marine vehicle.

There were children looking at men in Goggles, imagining themselves as future heroes.

For veteran Fleet Week attendees, the mission was simple and that was to arrive early, stake out space and enjoy the show.

For vendors, the tactics involved a bit more preparation.

A nearby high school robotics club staffed a souvenir booth. At least 7 percent of the sales will support their club.

By all accounts, Fleet Week in San Francisco was a stunning success.

"Fleet Week just reminds us of all the hard working men and women that dedicate their lives to fighting for the country and definitely a reminder of everything going on overseas right now," Jon Ruiz said.

"Seeing those families and the thank yous from everybody means a tremendous amount to all of us," Petri said.

There's no shortage of sights and sounds during Fleet Week. On Pier 39 there was live music, temporary tattoos, and patriotism.


People are already excited about coming back to Fleet Week next year.

Events will be held on Monday. For the full schedule, cick here.