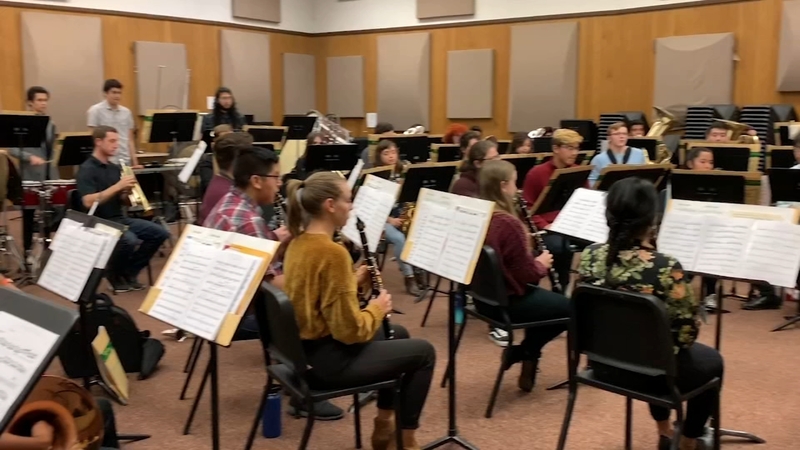 FRESNO, Calif. (KFSN) -- The Fresno City College Wind Ensemble is going to Carnegie Hall next spring, but getting there is no easy tune. They're hosting a fundraiser concert Wednesday night to raise support.

Over 50 students are taking a trip to the big apple in April 2020 to play at the one and only Carnegie hall.

"We're going to be playing in a hall where orchestras, so many great orchestras have played and we have an opportunity to be part of that," said sophomore Diana Del Muro.

When staff made the big announcement initially, it struck a chord.

"I was scared but really excited," said Del Muro. "It seemed like it was impossible to do."

"The first emotion I got was sadness because I'm really poor and I can't pay the fee, but then talking to Alisha and all these opportunities, having everything set up, this is possible," said freshman Raul Chavez.

"It made me happy to know if I put in the work I can go," added Chavez. "I can make it happen."

"It's my ways of fulfillment," added Chavez. "When I sit in band and play my part, I just feel like I'm part of something greater."

This isn't the college's first invite to Carnegie. The school's choir was invited last spring.

"It really says a lot about the valley and Fresno City College that we have such an amazing program that is being invited for these opportunities," said Band Director Elisha Wells.

They're hosting a fundraiser concert tonight at Fresno City College at 7:30 p.m. A $20 donation is suggested.

"It's not about getting them on a plane, it's about instilling in them something great," added Wells.