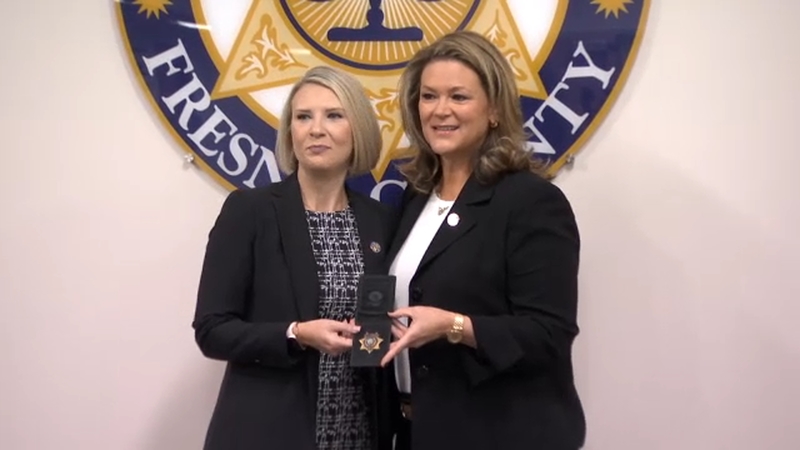 Rachel Baskin survived despite her husband firing a gunshot near her head and his attempt to slash her throat.

"Today means the absolute world to me," Rachel said. "It's been a very long road."

The worst day of Rachel's life became the driving force as she took action to improve her life and make her community safer.

When 13-year-old Leilah Baskin pinned a shiny new badge on her mother's lapel Tuesday, it completed a mission.

"This is it for me," said Rachel Baskin. "This is a dream come true."

Rachel Baskin is the newest prosecutor at the Fresno County district attorney's office.

But she's got a long history with her new boss, Lisa Smittcamp.

"I was a victim of domestic violence," Rachel said. "Should've died honestly."

Her former husband drove from his Marine base near San Diego to her family home in Reedley in 2009.

He shot and grazed her and slashed her throat with a knife. He slashed her mother's throat, too. And he shot her brother point blank in the head.

Somehow, they all survived.

Smittcamp met Rachel when she prosecuted Dejon Baskin, eventually sending him to prison for life.

After the 2012 guilty verdict, jurors who heard Rachel describe the attack couldn't help but hug her in the courthouse hallway.

Her brother told Action News the family would try to heal physically and emotionally.

"That's the most important thing - to continue to live your lives after something like this happens," Christopher Gentsch said in 2012. "Or else he won, basically."

They've all pushed forward in the ensuing years.

Rachel didn't have a lot of faith in herself in the days after becoming a domestic violence victim, but she let Smittcamp in on her hopes and dreams - one of which was to become a prosecutor.

"So I've been recruiting her since 2012," said Smittcamp, who was elected the county's district attorney two years after the trial. "So it's been a long road, but it's been a great road and I wouldn't change a thing. It's been amazing."

The county's top prosecutor says it's the professional honor of her life to watch Rachel's intelligence, kindness, and humility pay off.

She was there when Rachel graduated from San Joaquin College of Law.

She hired Rachel for the job that years ago seemed like only a dream.

"I felt like she protected me back then when I was a victim and I feel like she gave me the belief in myself that I didn't have at that time, Rachel said of Smittcamp.

Now Rachel wants to pay it forward, helping people like Smittcamp helped her.

Rachel will start out here working on misdemeanors, like almost every new deputy DA, but she's still dreaming big in her dream job.

She's aiming to eventually help victims like herself by prosecuting violent felonies, including domestic violence and homicide.