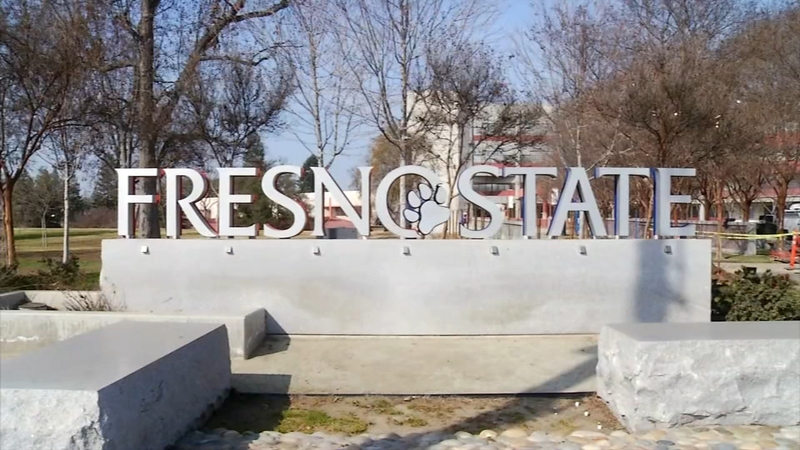 FRESNO, Calif. (KFSN) -- A top administrator at Fresno State was forced out after years of accusations of inappropriate conduct, including sexual harassment.

Action News talked to the reporter and dug up reports from two investigations.

An independent investigation concluded that Frank Lamas created an abusive workplace and engaged in inappropriate sexual conduct towards an employee.

He's not allowed to work in the CSU system anymore but when he left, Fresno State gave him hundreds of thousands of dollars and a letter of recommendation.

Lamas was the smiling face on TV whenever a new semester started at Fresno State.

But behind the scenes, employees made a series of complaints about him.

"This was an ongoing sexual harassment case, bullying, retaliation and a span of other misconduct that spanned over about six years," said USA Today investigative reporter Kenny Jacoby.

Jacoby was the first reporter to get documents from the university revealing the complaints, which started almost as soon as Lamas arrived on campus in 2014.

Employees repeatedly accused the vice president for student affairs of misconduct - from making sexist and misogynistic comments, to staring down women's shirts and unwanted touching.

University president Joseph Castro hired an outside consultant to assess the student affairs division in 2016.

Their brief report labeled Lamas' sexist and inappropriate comments as a concern. But Lamas kept his job.

An outside law firm did an investigation and found Lamas at fault.

The university parted ways with Lamas, but gave him more than a year's salary to leave without filing a lawsuit.

"Not only did Castro give Lamas $260,000, but he also gave him a letter of recommendation to help him find work at another school," Jacoby said.

"First and foremost, I apologize to anyone in the Fresno State community who was impacted by Dr. Lamas' behavior," Dr. Castro said in a statement emailed to Action News.

Castro said he took all the informal or anonymous allegations seriously, but their disciplinary avenues were limited until the formal 2019 complaint.

"We faced a series of administrative hurdles in making a change until we had a formal complaint that could be investigated," he said.

On Friday, an "open letter" was released from Dr. Castro on the California State University Twitter page.

On Friday, an "open letter" was released from Dr. Castro on the California State University Twitter page.

Lamas denied any wrongdoing when he spoke to investigators, acknowledged he was a tough boss, but pointed to 13 letters of reference, and blamed the complaints on people with an ax to grind.

Late Thursday, he sent us this response:
"Fresno State and the California State University system conducted investigations into allegations made against me that I maintain lack legitimacy and are false. I strongly believe that the information my many supporters and I provided during the investigations was ignored and/or quickly dismissed. Unfortunately, from the start of my time at Fresno State in 2014 anonymous later actual malicious and untrue allegations were made against me. I continue to maintain my innocence. My positive track record throughout my career speaks volumes for my professionalism, integrity and character spanning four decades. In 2019, I no longer felt I could continue at the university given additional allegations were made and in order to avoid the time and expense of a long protracted legal situation, I agreed to a third-party mediation to resolve all disputes and claims. I have cooperated fully with all investigations and subsequent mediation. In the end, with the assistance of a mediator, we agreed to a settlement and amicably decided to end our work relationship. I chose to retire from Fresno State December 31, 2020. I received an outstanding letter of reference from my supervisor then President Joseph Castro and positive evaluations every year I was at the university.

Given the things said about me initially after my first two years at Fresno State, I thought of leaving or moving to the faculty given my faculty appointment in the college of education. However, I was convinced to stay by my supervisor President Castro. We hoped the things said about my personal character would end. I had never experienced such things. I was brought to the university to be a change agent to improve the student experience and move our division to nationally accepted best practices. Unfortunately, there were some at the university reluctant to work with me and sometimes tried undermining my/our efforts. The main reason I stayed was because of my commitment to our students. Had I known then these attacks would continue I would have made a much different decision.

I remain proud of the many achievements of my team and myself whose energy was always directed at improving student access and success. I enjoyed my time at Fresno State building many positive relationships with students, colleagues and community members. I wish all the best to those who are committed to improving the Fresno State student experience and helping each student to reach their personal, academic and career goals."
Report a correction or typo
Related topics:
fresnofresno statesexual harassment
Copyright © 2022 KFSN-TV. All Rights Reserved.
TOP STORIES
Fresno area's holiday weekend starts with 3 domestic violence attacks
Fresno police looking for missing 5-year-old boy who has autism
14-year-old boy detained after BB gun shooting in Fresno neighborhood
Fresno educator wins one of the highest teaching honors in the nation
Fresno man fighting for life after being stabbed in neck by housemate
Texas gunman threatened rapes, shootings on Yubo app, users say
Gov. Newsom tests positive for COVID-19
Show More
Loved ones grieve for Fresno man as alleged killer pleads 'not guilty'
Woman gets 15 months in prison for punching flight attendant
Tulare County crews pull out severely injured driver trapped in car
Jury's duty in Depp-Heard trial doesn't track public debate
Gas prices may make this the costliest Memorial Day travel period ever
More TOP STORIES News