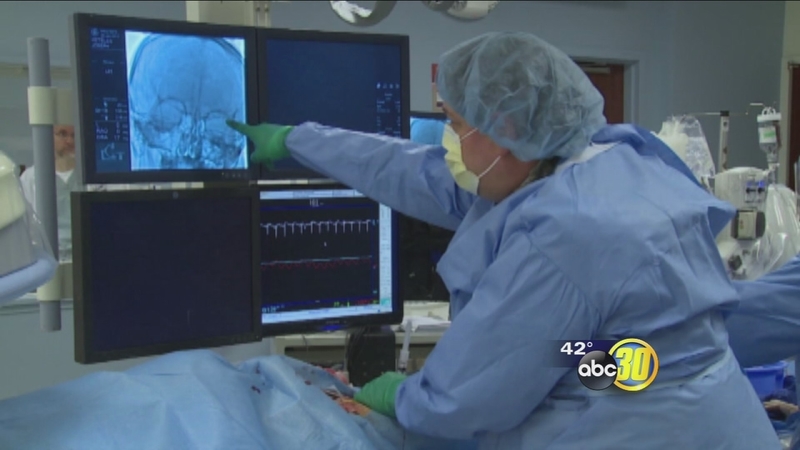 When someone suffers a stroke, time is critical. For every few minutes that blood and oxygen are blocked, portions of the brain suffer irreversible damage. Now, a technique designed to remove clots from large vessels in the brain may be highly effective in reducing stroke's life-altering side effects.

Patrick Mitchell is an actor and director with a community theater in Ligonier, Pennsylvania. But Patrick is still recovering from a drama of his own.

One recent early morning, he suffered a stroke at home. No one realized for almost two hours.

Francine Mitchell, Patrick's wife, recalled, "He couldn't communicate with me, and he couldn't move." Emergency crews rushed Patrick to Pittsburgh. Neurosurgeons knew his situation was critical.

Too much time had passed for clot-busting drugs to work. Brain scans showed the clot in a major artery but only a tiny section of irreversible damage.

Patrick was a candidate for a procedure to remove the clot, by using a retrievable stent. Surgeons thread a catheter through the groin.

Tudor G. Jovin, M.D., Director of the UPMC Stroke Institute at Presbyterian University Hospital told Ivanhoe, "Instead of us going to the heart, we go to the vessels that supply the brain."

The stent grabs the clot, and when doctors retrieve it the blockage comes out, restoring blood flow. Right after the procedure, Patrick was able to move and respond.

Dr. Jovin said, "We finally have a treatment that works in this condition."

For Patrick Mitchell, the procedure restored his ability to do what he loves with those who matter most.

"I thank God every day for giving me a second chance, too," Francine said.