Electric cellist medical student heals with both music and medicine 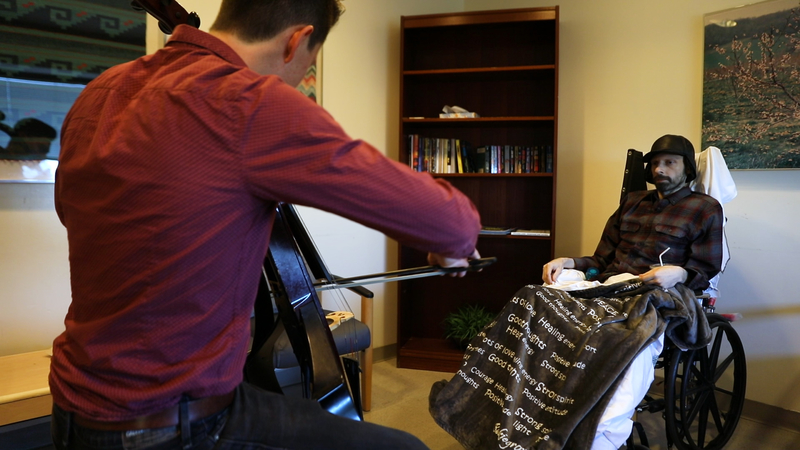 UPPER EAST SIDE -- When you imagine how a hospital sounds, you might hear the beeps of heart monitors, the creaks of gurney wheels on linoleum floors, and the relentless white noise of a thousand whirring machines. None of it is soothing or even pleasant.

But if you go to Mount Sinai on the right day, you'll hear something else: the soaring notes of beautiful, electric cello music, set against the frenetic drum kits of modern pop.

If you're lucky enough to hear it, you can thank one unique medical student who is helping patients heal in unexpected ways while turning conventional medicine on its head.

"I started in the 5th grade and I thought, I'm going to be a classical musician, the next Yo-Yo Ma," says Iain Forrest, a 24-year-old cellist and medical student at Mount Sinai's Ichan School of Medicine. "Then interesting things happened in college. I started performing music for patients in the hospital next to our university and just kind of seeing the effect this music had to uplift those patients made me think, I want to help these patients, but beyond just music. So that's what turned my interest into medicine and also music."

Forrest is doing cellular research to unlock the genetic secrets of cardiovascular disease. But the day Eyewitness News visits, before heading to the lab, he heads to the patient wing for a special performance.

"In June, I was diagnosed with a very rare cancer, a nasty, aggressive tumor," says Michael K. Brown, a patient at Mount Sinai. "I had kind of a rough summer."

Brown is a former musician himself. He played in rock bands during his youth and ran a music magazine in high school. Today, however, he'll be the sole audience member at a concert meant for one.

Forrest enters. The two embrace, talk for a bit, then the show begins. For 15 minutes, the cello sings, and Brown is rapt.

"It's been shown music therapy in hospitals helps reduce anxiety," says Girish Nadkarni, MD, assistant professor of nephrology at Mount Sinai and one of Iain's teachers.

"It definitely helps," says Brown. "It makes you forget you're in a lot of pain."

The hospital's normal soundtrack is on mute as Forrest's bow glides back and forth.

"I've seen music make a patient who didn't want to get out of bed want to get out of bed," says Tamara Solly, Mount Sinai's nurse manager and one of Iain's colleagues. "There are so many things he could be doing, but to come here and say, you know what, I want to find another way to reach patients. That struck me as pretty amazing," she adds.

At the end of the show, there's a round of applause and a deep bow.

For a moment, Iain and Michael aren't a patient and a physician, they aren't even a performer and a fan. They're just two music lovers sharing a hug and a moment of connection.

Forrest, who performs on the streets and subway platforms of New York City under the stage name Eyeglasses, wouldn't have it any other way.

"I think the beauty of music is it lets you open your ears, open your eyes, open your senses to escape from all that negativity," he says. "Medicine is as much a science as it is an art. You can be brilliant about every disease, but when you walk into that room with that patient, how you can hear their story, where they're coming from, how they feel, that's just as important to me as the science behind the medicine."