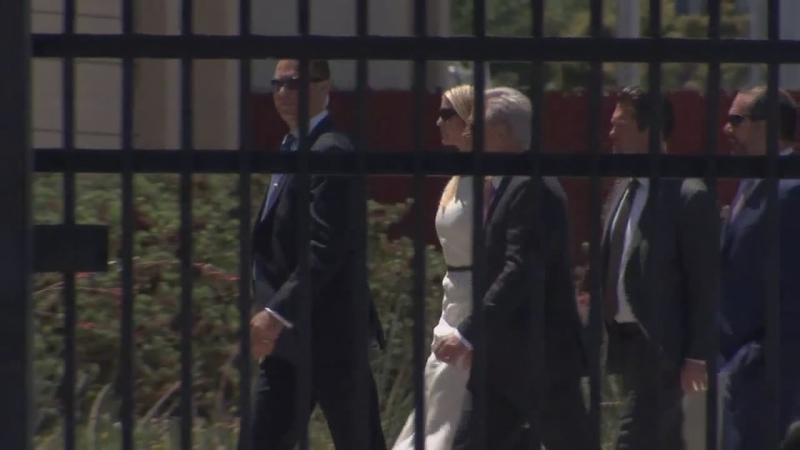 Ivanka landed at Fresno Yosemite International Airport and made her way the short distance over here to Harris Construction for a luncheon.

Fresno Police dogs gave the grounds a sniff and officers kept everyone a safe distance from the building.

Inside, GOP donor Michael Der Manouel described the atmosphere as, "Really laid back. It was kind of just a fireside chat."

Donors paid $1,250 and up to eat a meal and attend the forum with the First Daughter, getting details on her work-life balance and some of the issues Republicans are facing in Washington, DC.

Again, @IvankaTrump will be here in Fresno for a fundraiser, but as you can see from the invite, she’s not soliciting donations.
I believe there’s a legal restriction against that. pic.twitter.com/DBPPpYovOt

Meanwhile, a small group of protesters gathered outside for a chance to try and get a message across.

Stephanie Dominguez-Walton and Michele Pett came from the Bay Area with the loudest complaint, about the Justice Department policy of separating undocumented parents from their children.

"We decided this was important enough to us to speak up on behalf of these families that are being torn apart," said Dominguez-Walton. "These families who've fled their countries of origin because their lives are in danger and because we are America, the place where you should be able to come for safety and asylum."

Action News asked donors if they discussed the hot-button issue over lunch.

Der Manouel said, "Nothing directly. I mean, I think everybody wants to get this issue dealt with. It is a legacy issue that's more than 20 years old, and nobody's happy about it."

Another group of protesters stayed out of view with posters targeting the anti-union vote at Gerawan Farming.

Protesters arrived here at the @IvankaTrump.
2 of them anyway.
There’s also a group hoping to convince @POTUS to intervene on behalf of Gerawan in ALRB dispute: pic.twitter.com/pEctfKZrk1

One of their leaders paid to get in and carried a letter to Ivanka Trump, asking for the president's help against California's Ag Labor Relations Board and Governor Brown.

One of the people in attendance will give this letter to @IvankaTrump at the Fresno luncheon. pic.twitter.com/EG9ZTwQwgN

Donors told me she promised to read it on the plane ride out of Fresno.