The complex has burned more than 87,000 acres inside Sequoia and Kings Canyon National Parks and is only 30% contained.
KFSN 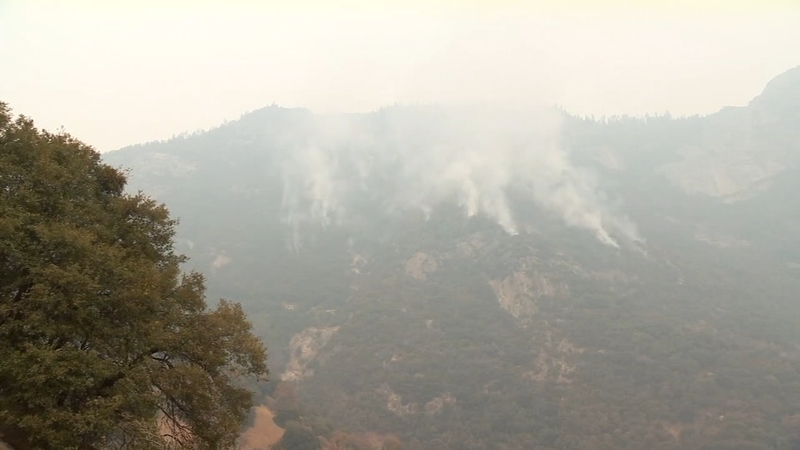 Authorities have removed the evacuation order for residents on the Upper North Fork Drive and Sycamore Drive on Tuesday.

Residents in these communities can return to their homes. Anyone traveling back to their cabins will need to show proof of residence to forest officials patrolling the area. The Generals Highway remains closed, but residents can access the area through the Burton Pass.

Road blocks remain at Oak Grove Bridge on Mineral Kings Road and on Highway 198 at the entrance of Sequoia National Park.

Click here for the latest evacuation orders and warnings in Tulare County.

Thick smoke made the firefight against the KNP Complex Fire difficult for fire crews on Monday.

Fire officials say visibility was limited, grounding their aircraft response in the northern area of the wildfire. Firefighters weren't able to make much forward progress in suppressing the fire, but they did limit spread.

Crews hope to have a full containment line between Montecito Lodge and Stony Creek built in the next few days.

Trees with weakened limbs and other falling debris continue to pose a danger for firefighters.
RELATED: Firefighter hit by rolling rock while battling KNP Complex Fire

Meanwhile, some snowfall and rain may have helped crews on the southern end of the complex.

Officials say aircraft crews were able to fly over the fire zone before the winds picked up to help determine where additional suppression was needed.

The complex has burned more than 87,000 acres inside Sequoia and Kings Canyon National Parks and is only 30% contained. Both parks remained closed.