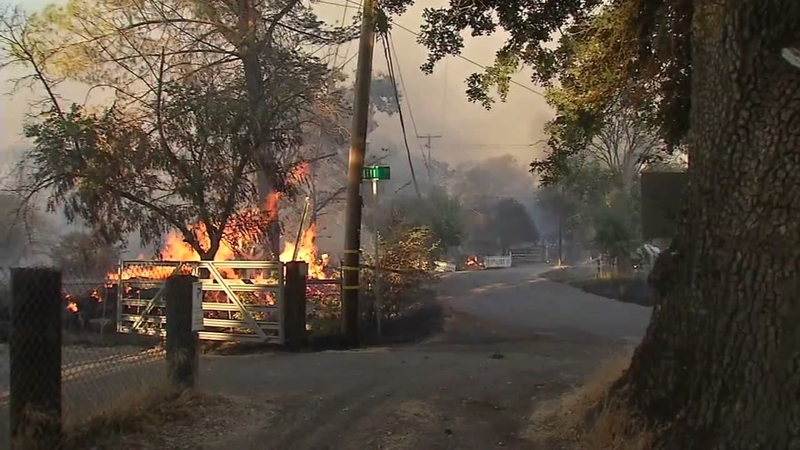 
Firefighters are calling this the Clayton Fire because it started near Clayton Creek Road. It started Saturday and crews seemed to have a handle on it until it blew up this afternoon, quickly taking over the town of Lower Lake.

"In a matter of 20 to 30 minutes you look around you and there's black smoke and flames that are 30 feet tall and 12 different spots around you," said Billy Caldwell, Lake County resident.

Lake County resident Jay Jakubowski is using water from his pool to put out hot spots on his property. Earlier, he and his son used the pool as shelter from the oncoming flames.

"How long were you in the pool?" asked ABC7's Lilian Kim.

"Just about 15-20 minutes or so, it got intense, smoke and the fire. It was blowing for a while here," said Jakubowski.

At least 4,000 people are under evacuation orders. But Leo Negrete and his son are among those who defied those orders, choosing to fight for their property instead. They hosed down the house and so far so good.

"If this thing burned, where am I going to live? I know I can rebuild again but you know, we see a little chance, we take it," said Negrete.

But so many other homeowners weren't so lucky. Flames destroyed homes in the neighborhoods along Main Street and Morgan Valley Road, not to mention businesses in the heart of Lower Lake. Fortunately, the historic Lower Lake schoolhouse museum sustained no damage, and neither did the post office.

Still, lake county residents aren't sure how much more they can take after three major wildfires last year.

"People are scared. We went through this, we had the Valley Fire which was devastating to a lot of people in this area and seeing this again it brings up a lot of mixed emotions," said Ben Lovato, town postmaster.

A town hall will take place Monday night in Middletown about the fire.

For those wanting to donate items to the evacuation centers, they are not accepting donations at this time. Information concerning where monetary donations will accepted will be forthcoming.

Officials now saying 100+ structures destroyed in the #ClaytonFire in #LowerLake. This is Rose St. pic.twitter.com/7AMVh6LV1f

Help is on the way from the Bay Area to Lake County.#ClaytonFire pic.twitter.com/Yobmrrav6r

Damage in #LowerLake from the #ClaytonFire. This was a 2 story ofc. bldg. FF not spraying embers this am- saving H2O pic.twitter.com/9JI1MQreUo