KFSN
By Dale Yurong
FRESNO, Calif. (KFSN) -- The grains and hops used to make this special brew were all donated.

The recipe for the 500 gallon batch inside this fermentation vessel at Tioga-Sequoia Brewing in downtown Fresno was shared across the U.S.

Like everyone else, Brewmaster Kevin Cox was stunned by the images of the Camp Fire.

"We decided heck yeah, we're in. Obviously very devastating for that community and anything we can do to help as a group of local and national brewers it's a pretty cool cause," said Cox.

As the spent grains are removed, the brew is boiled and hops are added.

"It's a very personal effort for us. Our community has obviously been hugely impacted and then 15% of our employees lost their homes as well," said Robin Gregory, of Sierra Nevada Brewing.

Over 1,000 breweries around the country were making Resilience beer on this day.

All proceeds from this brew will go to fire victims. Cox figures their donation should come out to about $9,000. The grand total is expected to top well over a million dollars.

"Sense of community is huge in the brewing community. We all help each other. It's about the least cut- throat you could ever imagine. We all share ingredients, share information. We're all in this sort of together," said Cox.

The Resilience beer on draft should be available at Tioga-Sequoia in mid-December.
Report a correction or typo
Related topics:
fresnoclovisnorthern californiacamp firecraft beerbeerfundraiser
Copyright © 2021 KFSN-TV. All Rights Reserved.
CAMP FIRE 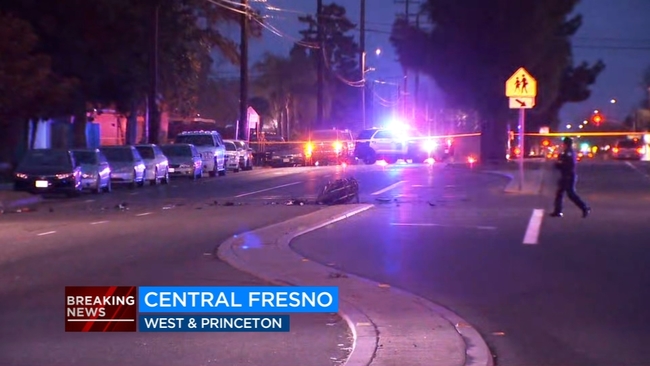 Schumer: Article of impeachment to be delivered Monday
Storms will bring rain to Valley, snow to Sierra over the next week
Hit-and-run driver arrested after causing 3 crashes in Madera Co.
Fresno receives $15.8 million to cover overdue rent for tenants and landlords
Man arrested for DUI after crashing into parked car, passing out at the wheel
Show More
Troops back in Capitol after banishment to parking garage
Mega Millions $970 million jackpot up for grabs
Car speeds off after hitting, killing 53-year-old man trying to cross street in southwest Fresno
Explosion in east central Fresno leaves 1 with burns to face, may have been honey oil lab
Fresno police officer possibly exposed to fentanyl while responding to crash
More TOP STORIES News