'Justice for Maleah!' Protesters accuse missing girl's mom of not doing enough to protect her 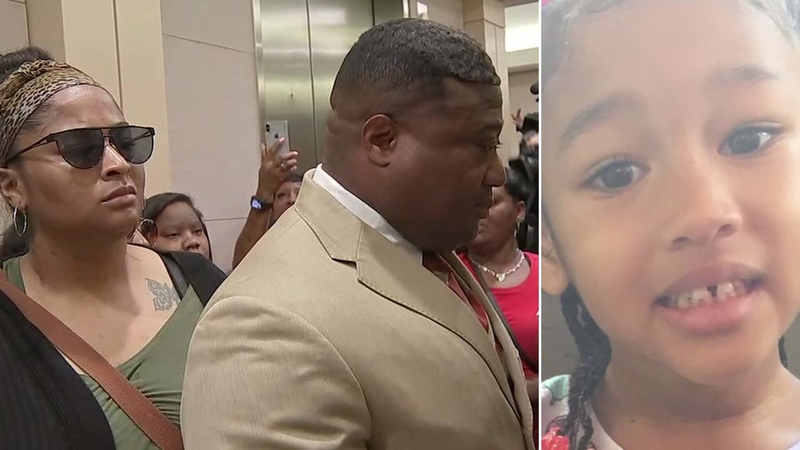 Protesters accuse missing girl's mom of not protecting her

HOUSTON, Texas -- The mother of Houston 4-year-old Maleah Davis, who has been missing for more than a week now, faced tough criticism from protesters Monday.

Brittany Bowens was in the courtroom waiting for her ex-fiance, Derion Vence, to make another appearance before a judge. However, the hearing was reset.

Vence has been charged with tampering with evidence, namely a corpse, in Maleah's disappearance, according to jail records.

Bowens' family and relatives of Maleah's biological dad, Craig Davis, were also in the courtroom.

"She didn't deserve this," said Davis' cousin Tamisha Mendoza, who is asking Bowens for answers.

All eyes were on Bowens, as protesters shouted accusations at her, in what they say, was a failure to protect Maleah.

Bowens did not speak as she stood behind community activist Quanell X, who spoke for her and continues to claim Vence killed her daughter.

"We have a great idea what he did with Maleah's body after he killed her in their apartment," he said.

As Bowens stepped onto the elevator and the doors closed, someone yelled, "Murderer," and, referring to Maleah, asked, "Where is she?"

Missing girl's mom says she is terrified for her.

Bowens also told ABC13 at the time that she was terrified for her daughter.

"My spirit is so broken, I feel so lost. I can't concentrate, I can't focus. It's so overwhelming for me. It doesn't seem real," Bowens said tearfully.

Then on Friday, she levied bombshell allegations against her ex, accusing Vence of abusing Maleah.

The case all began on May 3, when police say Vence told them he was on his way to Bush Intercontinental Airport with Maleah and his 1-year-old son to pick up Bowens from the airport.

He said that he pulled over near Greens Road and Highway 59 to check his tires because he heard a popping noise.

As Vence was checking his vehicle, he claims three Hispanic men in a 2010 blue Chevrolet crew cab pickup truck pulled up.

Police said Vence told them he was ambushed by the men, with one of them hitting him on the head, and he lost consciousness.

When he woke up on the side of Highway 6 near First Colony Mall around 6 p.m. the next day, his son was with him, but Maleah was not.

Police said Vence went to Houston Methodist Hospital in Sugar Land around 11 p.m. to seek treatment for his injuries with his son.

Surveillance images show Maleah Davis and her mother's ex-fiance walk into the family's apartment, but she was never seen coming out.

The case took another turn on Mother's Day when new surveillance images showed Maleah and Vence walk into the family's apartment, but she was never seen coming out.

The photos were captured on April 30, the same day Maleah's mother left town for a funeral and the last time Maleah was seen alive.

Cameras captured Vence bringing her back into their family apartment that morning.

Following that morning, investigators say he was never seen with her.

A few days later on May 3, cameras captured Vence leaving the apartment with his 1-year-old son, a laundry basket, and a black trash bag inside.

Houston police said the laundry basket captured on camera May 3 was found along with a gas can in the trunk of the vehicle that Vence reported stolen.

According to police, K-9 officers who are trained to sniff the scent of a cadaver were brought to the suspect's vehicle and other vehicles in the parking lot. Both dogs reacted to the suspect's trunk, indicating that they sensed human decomposition in the vehicle.

Police also say they observed drops of blood in the hallway leading to the bathroom of Vence's apartment and on various surfaces of the bathroom.

Officials say they then used a chemical agent that was sprayed and reacted to blood in the hallway and bathroom of the apartment. They say the chemical reacted to the presence of blood that could not be seen by the eye.

Police revealed the same vehicle was seen on surveillance video on May 5 at Methodist Sugar Land Hospital, where someone dropped off Vence. It was there that Vence first made the claim that he was attacked and that Maleah may have been kidnapped.

ABC13 obtained a new surveillance image from that night outside the hospital.

IS SOMEONE ELSE INVOLVED? Police believe Darion Vence was dropped off at Methodist Hospital by someone driving the same Nissan belonging to Maleah’s mom. It’s the car Vence claimed was stolen. Right now only Vence is charged. #Abc13https://t.co/PgjFTb1QrH pic.twitter.com/7DjCoN2g32

Vence's bond was originally set at nearly $1 million on Saturday, but it was lowered Monday to $45,000.

Law enforcement officials have not yet confirmed whether Maleah died, but investigators do not think she is still alive.

ABC13 has learned the child was recently returned to her home after CPS removed her last August.
According to CPS officials, the girl and her two siblings - 5-year-old and 1-year-old boys - were removed as the agency investigated allegations of physical abuse related to her head injury.

The search continues into night 2 for 4-year-old Maleah Davis.

The three siblings were brought back in February.

Bowens said it was determined a fall was the cause of the girl's injuries.

Texas EquuSearch volunteers have been helping to look for Maleah since last Monday, when Houston police requested their immediate help.

"I'm choked up right now thinking about her," Miller told ABC13. "I've been on these cases before. If it doesn't touch your heart, and you don't get emotional, you're just not human."

On Mother's Day, the group was out again, searching in Sienna Plantation.

Mom says she's terrified for daughter, who is missing

Meanwhile, a memorial with stuffed animals is growing outside of her family's apartment in southwest Houston.


Many in the community say they want answers. Neighbors held a memorial for Maleah Sunday night and told ABC13 they are haunted by what has happened so far.

"I don't know if it's everything that is going on, but I dreamed about her and she was asking me for help. And I don't know what to do," said neighbor Jannia Soto.

"It just hits home ... I can't see how anybody can enjoy this day," said Mildred Crump.

Volunteers plan to continue searching for the girl Monday.

IS SOMEONE ELSE INVOLVED? Police believe Darion Vence was dropped off at Methodist Hospital by someone driving the same Nissan belonging to Maleah’s mom. It’s the car Vence claimed was stolen. Right now only Vence is charged. #Abc13https://t.co/PgjFTb1QrH pic.twitter.com/7DjCoN2g32