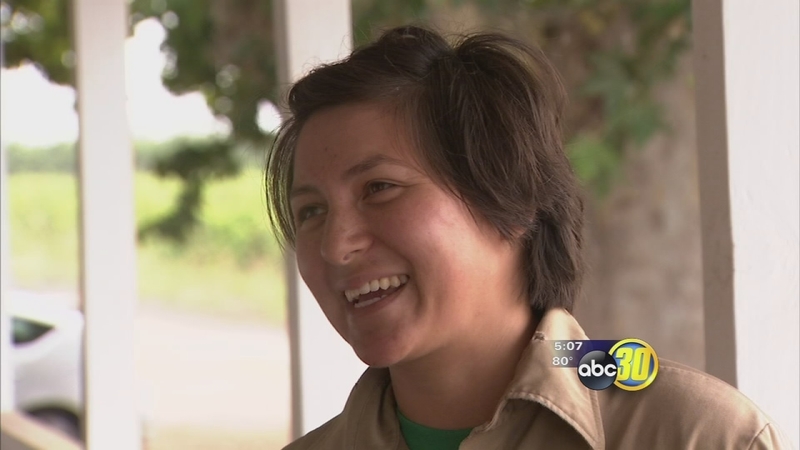 FRESNO COUNTY, Calif. (KFSN) -- It isn't often Valley kids leave the family farm, earn a Master's Degree and then return to work the orchard. But local farmer David "Mas" Masumoto is no longer is thinking about retirement but, rather, passing on the family legacy.

The dark skies opened up and drenched the Masumoto farm in Del Rey, halting the harvest of their Sun Crest heirloom peaches.

Masumoto said, "This is like an unfamiliar feeling to have rain but it's good for everyone."

A July rain is just as rare an event as a college educated kid coming home to work on the farm.

Daughter Nikiko Masumoto said, "I think like a lot of farm kids I never thought I'd ever come back. Ever. Ever."

But while at UC Berkeley a lecture on pesticides hit home.

Nikiko said, "For the very first time I was able to place what we're doing as an organic farm in a much larger context."

The family is featured in a documentary titled "Changing Seasons" they will show on the farm on Saturday. Marcy and son Korio will prepare desserts such as baked meringues with fresh peaches and whipped cream and ice cream with a peach brandy sauce will also be served.

A 25% reduction in irrigation has resulted in smaller but sweeter peaches.

Mas said he was, "Trying to get people to understand that this fruit is just as good as this big fruit."

Through social media Nikiko is pushing a small fruit revolution.

Mas explained, "In one sense a new generation brings all that new element to the farm that I'm too old for in many ways."

But self-doubt can creep in on those hot days.

Nikiko wondered, "Why am I doing this and hopefully the answer always come back - it's family, it's the belief of feeding people and taking care of the earth."

Mas said, "What happened was when she decided to come back it changed the timeline of our farm."

The 61-year old Masumoto grows raisin grapes and stone fruit over 80 acres. Nikiko will keep the farm going even with a Master's degree in Performance from the University of Texas.

Nikiko added, "Although theater, performance and farming might not seem like natural bedfellows they really are one root for me."

Sometimes when you go away you realize what is most important.