100 scary seconds: What it's like to wipe out on a 50 foot wave at Mavericks in Half Moon Bay 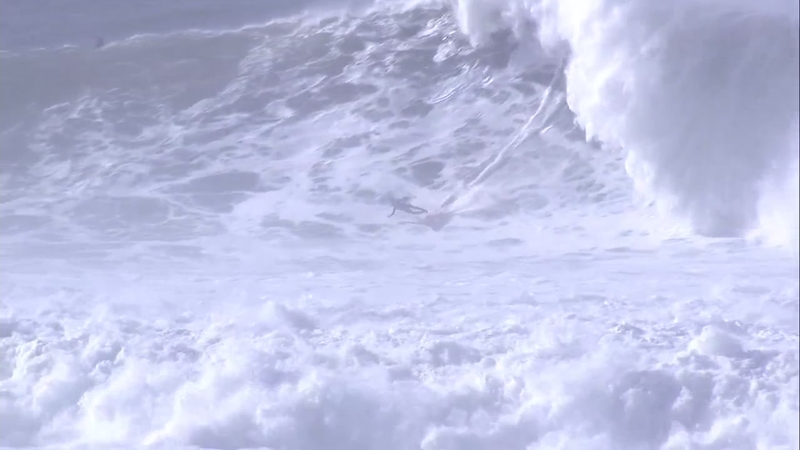 What it's like to wipe out on a 50 foot wave

HALF MOON BAY, Calif. -- One surfer got an up close and personal look at the power and danger of Mavericks Monday wiping out on five-story wave and then fighting for his life for 100 terrifying seconds.

The surfer dropped in on the monster wave and appeared to be in good shape until falling on the wave face and then getting rolled up in the whitewater.

He disappeared from view as jet ski rescue crews raced in to try and find him, but before they could, another 20-foot wall of whitewater washed over the surfer.

On the video, Smith and other photographers can be heard expressing concern about the surfer getting hit by another wave.

After that wave passes, a jet ski crew races in again and finds the surfer, 48 seconds after he wiped out.

The rescue crew makes a pass hoping the surfer will grab on to the jet ski, but they can't connect before another wall of whitewater rolls in pinning the surfer for a second time.

RELATED: Waves that rumble like a truck: Mavericks has been challenging top surfers for 20 years

After this second 'hold down' the surfer somehow manages to get back on his surfboard.

Two jet ski crews race in to try and grab him, but just as he's paddling towards them a third wall of whitewater forces him under for a third time.

Finally after the last wall of water passes and a third jet ski crew joins the rescue attempt the surfer is plucked from the rocky and roiling water 100 seconds after wiping out on a five story wave.