Fresno woman in coma to deliver her first baby 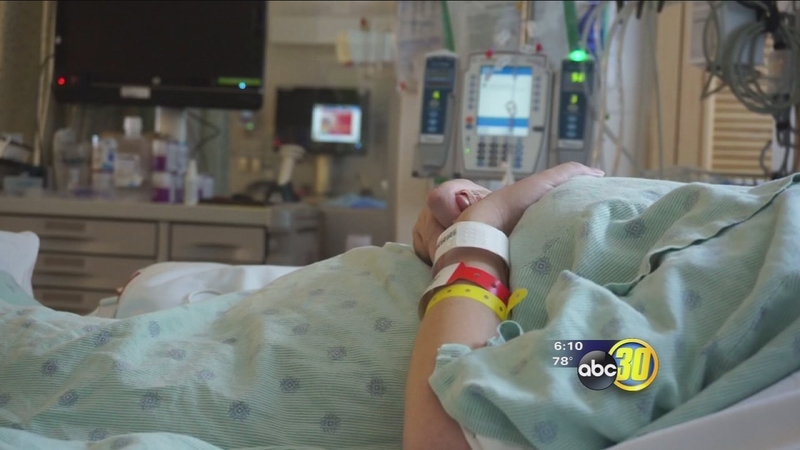 Fresno woman in coma to deliver her first baby

FRESNO, Calif. (KFSN) -- A marriage and family therapist from Fresno will deliver her first baby Thursday. Only, she will not be taking part in the birth. Melissa Carleton is in a coma. In March, she was being treated for a brain tumor when she had a seizure and never woke up.

Melissa was in the midst of a wonderful season of her life. Last year, she had a dream wedding in Norway and was pregnant a short time later. But, what doctors discovered during her second trimester, would change everything. Right now, Melissa cannot wake up. Just after 10:00 Thursday morning, doctors will be delivering her baby by C-section. A lifetime memory Melissa will miss.

Brian Lande is facing a future he never imagined. Thursday he will become a father, without the wife he knew would make the perfect mother.

"I know that being able to love this little guy is going to be a wonderful experience, but I also know it's going to be very hard for me," said Brian. "To know that I am going to be the one to hold this baby first. And seeing him, and getting to enjoy him, and not my wife."

Brian will bring his baby boy home to a Bay Area apartment to begin the journey of raising him without Melissa. He has all the basic necessities, thanks to the generosity of others.

The compassion of others and thoughtful gestures have kept Brian going, and the fact he feels he must live up to the vows he took the day the couple wed last year.

Most days and some nights he spends next to his dear Melissa's bedside, talking to her, rubbing her belly and trying to wake his sleepy wife. He shared this video of her that he took inside the intensive care unit at UC San Francisco.

Melissa and the baby are monitored closely. Pictures of their dogs adorn the walls, along with images from ultrasounds.

When Brian is not at the hospital, his home away from Fresno, has become an apartment, that's been donated by a retired San Francisco police officer. It's just one of the many gifts he's been given by total strangers.

Brian remembers the day before his life would change forever. Melissa was being admitted into the hospital and was so physically exhausted, she could hardly walk.

The next morning, she had a debilitating seizure. Doctors told Brian if Melissa wasn't already in the hospital when it happened, she would have been brain dead. The seizure damaged part of her brain and forced a medical team to rush her into emergency surgery to remove the tumor. The benign mass was taken out without any complications, but the seizure has left her unable to fully wake up.

Sometimes she opens her eyes, or holds Brian's hand. While these are encouraging signs, doctors have cautioned the family about getting too optimistic.

Melissa had hoped to wait until after the baby was born to have the surgery, but her declining health gave doctors no choice. Brian remembers she had one big fear.

His favorite pictures of his wife are next to Brian's bed.

Brian added, "Melissa and I were madly in love with each other."

His badge is there too and a coin that reads, be fearless. Brian is a Santa Cruz County Deputy Sheriff. He is used to handling stressful situations, but none compare to the one he is dealing with at home.

"It had been growing probably from two to three years," said Brian. "So, probably the entire time I've known Melissa, she has had the tumor. It grew slow enough that she was able to adapt to it without anybody noticing."

Melissa's mother is a nurse practitioner at Community Regional Medical Center. So when Brian told her about the large tumor, she had to go see the x-rays for herself.

"I had a good friend of mine who is a physician, go with me, the following day to the radiology department, to look at the films for the first time," said Melissa's mother Lawanna Farrell. "And when I saw them, I had to sit down."

Lawanna knows more than most other moms, about her daughters devastating diagnosis and the possibility Melissa may never recover. Melissa's father says no words describe the painful months.

John is a professor at Fresno State, but his most important job is as a father. And many times he's had to digest reality in small doses.

Melissa is a planner so late last year, she had already picked out a name for her son, and sketched out a picture she wanted painted in his nursery.

At age 39, the life she dreamed of was all coming true. From a picturesque wedding to a honeymoon in the fjords in Norway to becoming a mom.

Tears of joy and sadness are expected Thursday when the baby makes his grand entrance. It won't be as they had hoped, but her family will make it all they can for Melissa.

Lawanna said, "She will hold him, even if we're holding her, in order for that to happen."

The baby is full term and as far as doctors can tell appears to be healthy.

After Melissa heals from having the baby, she will be transferred to an intense brain rehab clinic where she will undergo more intense therapy to try and wake her.

Brian says he'll let us know as soon as the baby is born. And we'll have an update on the newborn, and Melissa's condition when it becomes available.