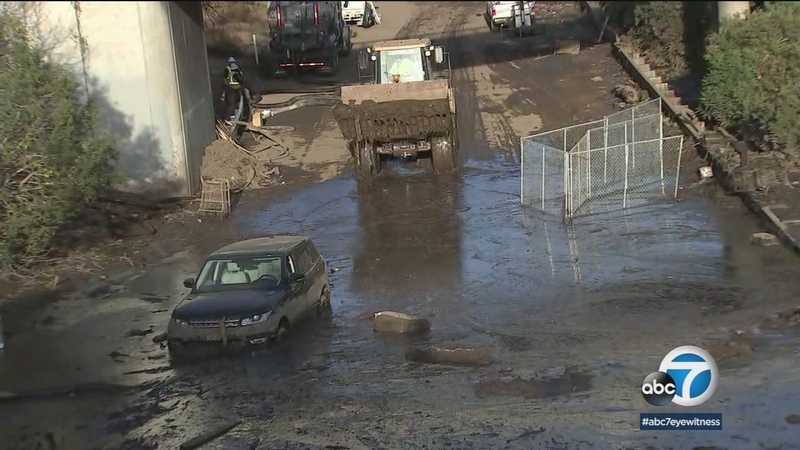 MONTECITO, Calif. (KFSN) -- The reopening of the 101 Freeway in Montecito remained unclear Saturday as crews continued to clear out mud, water and debris from a portion of the highway.

Both the southbound and northbound areas of the freeway were covered in water, mud and debris. Loaders gathered large clumps of mud, while workers pumped out water.

The mudslides happened Tuesday after heavy rains affected areas recently charred by the historic Thomas Fire. As of Saturday afternoon, 19 people were killed in the mudslides, while at least five people remained missing.

On Saturday, authorities said during a press conference that the 19th person killed was identified as 25-year-old Morgan Christine Corey, of Montecito. Her body was discovered east of Olive Mill Road.

Earlier in the week, the body of Corey's 12-year-old sister, Sawyer, was also found.

The Santa Barbara County Sheriff's Department created a page with the names, ages and photos of people who were still missing. One of those people, 62-year-old Delbert Weltzin, was found alive, according to authorities.

More than 1,500 personnel were assigned to search-and-rescue and cleanup efforts in the area, which spanned about 30 square miles. Groups were supported by K-9 units, helicopters and bulldozers. Authorities said crews work 16 hours a day.

After a better damage assessment earlier in the week, a total of 64 homes were destroyed, while 300 to 462 were damaged.

Days before the mudslides, the county issues repeated warnings on social media, news media and emails about the potential for mudslides during the major storm. Only an estimated 10 to 15 percent of residents fled their homes when ordered, and much of the damage occurred where evacuation orders were voluntary.

As crews continue to clear out the ravaged 101 Freeway, which no longer has a timeline for when it will reopen, people along Coast Village Road said it's caused another hit to business.

At first business was effected by the Thomas Fire, but now tourists who usually frequent the area can't come because of the freeway closure.